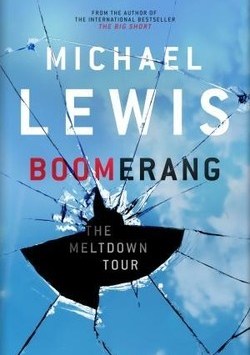 Michael Lewis’ earlier book, The Big Short, was a widely acclaimed, definitive book on the sub-prime crisis and everything that followed.

It achieved that status not by telling the story from the heart of Wall Street. Rather he worked his way in via the actions of smaller players far from the financial epicenter.

That gave the work a context with which anyone could identify. It led readers gently into the complexity of what turned out to be a monumental scam. The world is still paying for that, along with the shenanigans of the countries visited in Boomerang, his latest book.

Lewis likes a good financial disaster. He is a crafty and at times eloquent writer. He gives you a point-blank view of what happened at the coalface.

Lewis wrote his first bestseller, Liars Poker, in 1989, after a stint as a bond trader with Salomon Brothers. The book was largely credited with bringing down that firm’s reputation. Goldman Sachs, among others, suffered a similar fate in The Big Short. If you want pesky but penetrating coverage of financial chicanery, Lewis is your man.

So it is with Boomerang, a sort of financial equivalent of P.J. O’Rourke’s 1989 classic, Holidays in Hell.

Subtitled “The Meltdown Tour”, Boomerang travels via Iceland to Greece, onto Ireland and into Germany, before finally coming to rest in a place called Vallejo. That’s a town in one of the most bankrupt states of all, California.

In four out of those five locations, something shifted a long time before the arrival of the sovereign debt crisis. In Iceland, it started as far back as the 1970s. That’s when the Reykjavik Government effectively privatised fish.

Following some horrendous seasons, they simply worked out what was a sustainable catch in Iceland’s fishing grounds, and then they allotted a quota to existing fishermen based on their historic catch.

Before long, the quota was securitised. It was a tradable item. You could sell it in the market, write derivatives on it and leverage up by borrowing against it. By monetising their quota, Iceland’s fishermen were suddenly rich.

The impact of suddenly becoming rich is a central theme in this book. According to Lewis, not every culture acts the same when it happens. If you put everyone in a dark room with lots of money and no one watching, they will do different things, few of them good.

In Iceland, people changed jobs. They went from fishing to investment banking. The cost to Iceland and its three main banks was essentially bankruptcy.

The end result has not been a lot different in Ireland, Greece or California. Even though we have been fed a daily diet of mind-boggling figures since the Lehmann’s collapse, the massive losses and the crazy decisions chronicled by Lewis are still staggering.

For Lewis, these are symptomatic of a cultural failure to cope with easy credit.

His short summary of Ireland’s predicament can apply to any of these countries, but also to businesses that have discovered the cost of leverage: “They’d gone from being abnormally poor to being abnormally rich without pausing to experience normality.”

Although Lewis enters Greece via a remote monastery on the Aegean coast, the final outcome is no different. It was access to easy money on joining the euro that suddenly gave Greek governments the wherewithal for unrestrained expenditure – including doing dodgy property deals with the monastery.

His closing observations on Iceland apply equally to Vallejo.

“When you borrow a lot of money to create a false prosperity, you import the future into the present. It isn’t the actual future so much as some grotesque silicone version of it. Leverage buys you a glimpse of a prosperity you haven’t really earned.”

There is an air of frivolous consternation throughout Boomerang that makes it a light and educational read.

Pretty much the same thing has happened before – Dutch tulips, south sea bubbles, the Great Depression and now the Great Recession.

The same thing is going to happen again some time, somewhere. While it is easy to blame the Greeks or the Irish, you get the feeling any culture could be in the wrong place at the wrong time the next time easy money comes around.