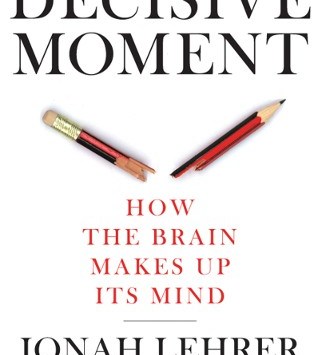 The Decisive Moment: How the brain makes up its mind by Jonah Lehrer

Here’s a book that tells us what we already know: We often make decisions without thinking.

In The Decisive Moment, Jonah Lehrer also tells us that we are often right and explains why that can be the case.

A neuroscientist and a contributing editor to Wired magazine, Lehrer strings together an array of fascinating stories and experiments to unpack our decision-making processes.

Central to his thesis is that emotions play a key part. They should not to be consigned to the waste bin of irrational functions.

Rather, they play a key part in informing rational decisions. We don’t stick to clear logic. “A brain that can’t feel,” he says, “can’t make up its mind” – something that shows up in research on accident victims who have lost the parts of their brain that house emotional response.

Alternatively, people who have well trained intuitive or emotional responses can use those attributes to make the right decision quickly.

He cites a sporting example, the New England Patriots quarterback, Tom Brady. Like most quarterbacks, Brady is known for his remarkable ability to read the field and execute the winning play in a nanosecond while under intense pressure.

What happens is that in an instant, Brady’s emotions send negative twinges, telling him that his preferred wide receivers will be covered. His emotions may pick that up just from peripheral vision.

Meanwhile, positive twinges identify an uncovered man and Brady reflexively torpedoes the ball to him.

Rational analysis never entered into it. Emotions spark decisions far more quickly. There simply would not have been time for logical deliberation.

That’s not to say that we should depend on emotions for all decisions. Most of us can remember a decision taken on an emotional basis that wasn’t that great.

What’s more, not all of us are good at it: some people perform better than others in tense situations outside their comfort zones.

Nonetheless, intuitive feeling is built on history and we can learn how to use it. Our experience forms the correctness of our intuition. “Trusting one’s own emotions” says Lehrer, “requires constant practice.”

This is even more so in complex situations, where a well-founded emotional instinct can cut through excessive deliberation.

Serious overthink can crowd out our prefrontal cortex (that’s the part of the brain where we make decisions), confusing the issues at hand and leading to inappropriate decisions.

In one simple experiment, college students were asked to identify the best seller out of a range of strawberry jams.

Their analysis was exhaustive. They looked at taste but also studied things like spreadability, colour, and bottle shape, to name a few.

This level of overthink led them to favour the worst seller, whereas the actual market leader was simply the one regarded by most people as the tastiest.

Lehrer’s analysis has implications for the way we manage ourselves.

Our working memory has limitations. On average, having to remember more data than seven digits starts to tax its ability.

Once fully preoccupied with that many items, our brain is left with too few cognitive resources to control emotional urges. That can stymie priorities and lead to incorrect action or no action at all.

No surprises then that stock traders make worse decisions when either too worked up, or too focused on rational logic or, worse still, both.

That goes some way to explaining how overflowing in-trays can fuel procrastination. Just their appearance suggests too many things to consider, thus leaving the brain unable to make a quick decision about what to get on with next.

This caution against assessing too much information isn’t confined to stock pickers.

Lehrer quotes the well-documented impact of the MRI.

Suddenly the medical profession had access to far more information about what was going on inside a patient’s vertebrae. Great information, but there was just too much of it.

Treatments based on this surfeit of information led to little improvement in outcomes. Conversely, traditional treatment like bed rest remained extremely effective. It brought about an optimum result for little intervention.

Despite all that, the book recommends that we always look for alternative hypotheses in order to firm up what you actually do know and what you don’t before making a decision.

That’s the logic behind Cockpit Resource Management (CRM), in which aircrews are encouraged to question the captain’s actions if they do not agree with them.

This shift away from a very strict chain of command is largely credited with the gradual fall in aircraft disasters due to pilot error.

“It deters certainty and stimulates debate. In this sense, CRM increases the atmosphere for good decision-making”

In business, that translates into a call for diverse input and collaboration to minimise the chance of getting it wrong.

There is a lot in the book. For those who have always had a sneaking suspicion their gut instincts are usually on the money, it will be reassuring.

But there are also some good reasons why uncertainty can be useful and how, if used correctly, it can help you avoid those times when your gut had it wrong.

Three out of five stars.