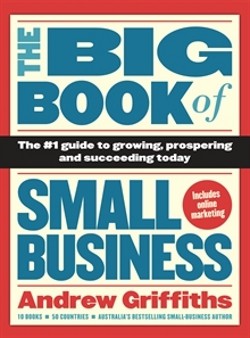 The Big Book of Small Business by Andrew Griffiths

I first picked up an Andrew Griffiths book five years ago in tropical north Queensland. It was the only business book in the Port Douglas bookshop.

I know. It’s a pretty sad state of affairs. Instead of snorkelling and parasailing, I was in a bookshop, not even browsing the thriller section. Instead I was thumbing my way through a management text.

My wife, appalled, thought this behaviour uncool. My teenage daughter said it was not fully like wow.

In truth, I had just finished an Ian Rankin thriller. I was pretty relaxed, my head was clear and I was up for some ideas.

I got some in Griffiths’ 101 Ways to Build a Winning Business.

Griffiths is passionate about small business and has been for some time. This is his eleventh book. His works have been translated into numerous languages and are sold in 50 countries.

What I liked most about my tropical light reading was the short codicil at the end of each chapter. It was called “What can you do today?”

For someone who thinks we spend way too much time on strategic over-think and too little on action, this was refreshing stuff.

I returned from holidays rejuvenated and full of ideas.

Griffiths’ latest work, The Big Book of Small Business, comes at a time when it seems just about everyone wants to be an entrepreneur.

If there’s such a thing as Web 3.0, it is the explosion in awareness that just about anyone can get something going online.

That’s one reason why this readable book is important. Once everyone can do something, it gets commoditised. In a marketplace crammed with thousands – no, make that millions – of small players, it’s harder to get traction.

Does that mean you shouldn’t try? Griffiths thinks not. He’s a champion of the small player, of the start-up having a go. But, that comes with cautions.

The internet just provides an accessible playing field. He warns against being over inspired by things digital. In his words, “embrace technology but avoid being enslaved by it.”

In the current environment, this is a reminder that a lot of things haven’t actually changed. The fundamentals of running a team, financing a business, building a customer base or facing difficult times are still the same, either online or over the counter.

Customer service and motivating staff are Griffiths’ strong suites and there is no shortage of ideas here. They are the platform on which a successful business stands – and they easily translate into online tactics.

Griffiths’ “customer service commandments” should be stuck on the wall of any business. You have probably heard a lot of them before but they are often forgotten in the sometimes frenzied activity that is called running your own show.

Which brings us to the completeness of the book. It doesn’t miss much. There is advice on how to work with friends and family and how to actually have a life while also running a business.

Rounding off this holistic approach are chapters on what to do when it goes wrong and how to survive if the business doesn’t. The author has good ideas on this; he’s been there himself.

Given the entrepreneurial boom and the ease of entry into the online world, there are likely to be a lot of casualties in the current decade. The Big Book of Small Business might help you avoid ending up in the statistics, or coping with life if you do.