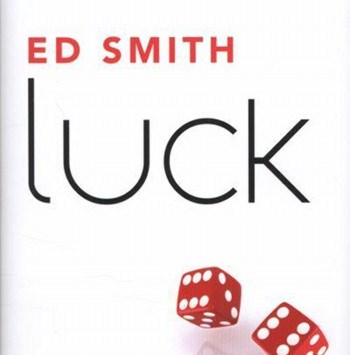 It’s fashionable to talk about the connection between sport and business at the moment. Luck, however, doesn’t hold such pretensions. It’s basically about, well, luck.

Luck does not present any groundbreaking research in the fields of chance or risk. In some ways it is more an armchair survey of recent literature on the subject.

But despite the compendium nature of the work, it raises serious questions about the notion of luck and it’s changing role in business and society. Not all of it for the best.

Ed Smith is a former English test cricketer, perhaps not a standout in that sport’s history and better known today as a journalist and author.

Central to his thesis is the nature/nurture debate. At a time when both opinion and policy seem heavily biased toward nurture, his book is a refreshing look at why nature still stacks up as a serious input to success.

What’s more, it is luck that helps success get more evenly distributed rather than simply left in the hands of those born the most gifted.

That may not be obvious in his early examples. Drawing from his own sport, he notes that although 92% of UK schoolchildren are educated by the state, some 73% of the current English cricket team was schooled in private institutions.

This is a recent development. The numbers of state educated cricketers representing their country has been declining since the 1950s. Ditto for rugby. Even “Olympic gold medals won” has a similar profile.

In other words, the likelihood of sporting achievement has shifted in favour of the socio-economically lucky.

Luck, in fact, can play a central role in any sport, and by inference, in business. Quoting an intriguing study by no less than the IMF, national sportspeople who made their debut on a home ground were significantly more likely to remain in the national team and went on to have higher career score averages.

There is a parallel here in the more forgiving training ground of your home market. When you are on a steep section of the learning curve, local knowledge will help you avoid obvious pitfalls.

Doing what you know is often a safer route to expansion than over-reaching into an area that looks exciting but proves to be more challenging.

What makes this book so readable is the rolling stories that we can easily relate to, whether it is Winston Churchill’s lucky survival of a car accident in New York in 1931, or Scottish golfer Colin Montgomerie hitting no less than nine holes-in-one.

There is an element of luck in both. In fact, Montgomerie makes the point that the perfect shot in golf is to land the ball just on the downside of the hole, a short uphill putt being regarded as an easier play.

That’s what top golfers try to do. A hole-in-one is therefore, by definition, an imperfect, but lucky, strike.

Having spent most of my career as a stockbroker, this rings a very loud bell. The share recommendations that brought me the greatest praise performed not because of my analysis, but because the market, or the sector, or something completely outside my control turned a reasonably good idea into a spectacular result.

My job was to pick stocks that might outperform the market, not pick the market. Yet it was the market that usually delivered the biggest gains.

That’s pretty much Smith’s definition of luck: something that happens that is outside your control.

Of course, we often lay claim to superior talent or more diligent practice as a result, and sometimes those factors will underwrite performance. But plenty of people with similar strengths don’t necessarily get the lucky breaks.

In fact, the hubristic tendency in human nature can cloud reality.

There is a caution to apparent success. Smith quotes Nassim Taleb, author of The Black Swan: “What looks like a great track record is sometimes just a lucky break about to run out.”

Attempts to eliminate luck can be blindsided by it. The Long Term Credit Management fund, which famously crashed and burned in a billion dollar collapse, was designed to be failure proof.

It was destroyed by the unexpected collapse of the Russian bond market. That might have been bad luck, but it was still luck.

There is a reassuring aspect to all this. It means that the exceptionally gifted do not have the field to themselves. It means that we lesser souls are still in with a chance.

It also provides a key to compassion. In a moving story, a friend of the author’s son was tragically killed in a freak car accident. The driver was necessarily facing prison time when the family wrote to the court.

They asked that the driver, who was deeply remorseful, not be given a custodial sentence. They had suffered great loss but they did not want retribution. It was, they said, an accident.

As Smith says of luck, sometimes things happen that are outside your control. There is no one to thank, and no one to blame. It was just a matter of luck.

I regularly meet people who are swept up in the “anyone can make a million” seminar movement. This book is a refreshing reminder that not everyone does, with the comforting codicil that it is not necessarily their fault.