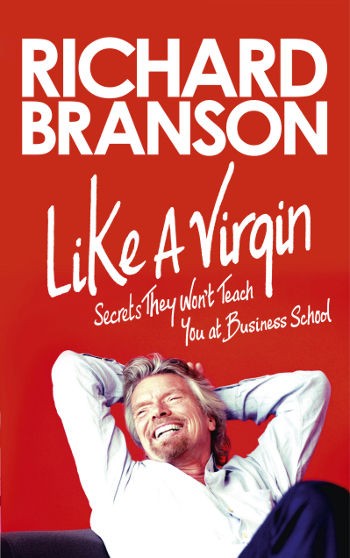 You have to admire Richard Branson. Here’s someone who just doesn’t fit the mould.

His early CV would hardly suggest him as “the most likely to succeed” – dyslexic, expelled from school and no clear direction.

You can also add to the mix attention deficit and the failure of his early start-ups.

Branson has never denied those things; rather, he has embraced them. He is a great example of the power of the easily distracted personality. Without those traits he would likely never have built such a diverse empire.

People talk about integrated businesses. Branson refers to his as “disintegrated”.

After all, it includes airlines, record companies, IT and a bank.

Equally, this is a book for people where concentration is an issue. It zips all over the place and has no less than 74 chapters. For the easily distracted reader, the small mercy is that no chapter is more than four pages long.

One of those short chapters explains the diversity of the Virgin brand. He calls it A-B-C-D, or Always Be Connecting the Dots.

They are, of course, Branson’s dots, not someone else’s.

They can be easily summarised: customers, people, fun. Those three are a constant in any Virgin-branded business. The switch from record stores to airlines was based on the same principles that applied in the shops.

Virgin Airlines was about doing something different for customers, letting the people who ran the airline actually run it, and having fun along the way.

The “fun” thing often grates on people. One of the most irritating things about Branson is that not only does he talk about fun a lot; he also seems to actually have a lot of it.

I am probably not alone in having attended corporate off-sites where the CEO has told everyone to have fun. Yet, no one does, including the CEO. To that extent, Branson walks the walk. If the guy at the top is authentically enjoying himself, it makes it OK for everyone else to do that too. It’s one reason he is so popular with Gen Y.

It’s both embarrassing and telling that when asked his favourite song, he nominated Cliff Richard’s Summer Holiday. From memory, it includes this somewhat tacky line: “Fun and laughter on our summer holiday, to make our dreams come true”.

Hardly Gen Y, but according to the introduction it was one of the first records he ever bought. He’s embarrassed about it too but it’s a telling admission.

Nonetheless, don’t be fooled by the folksy presentation. Branson does look before he leaps. Virgin Airlines was such a case. He only went ahead after doing a leasing deal with Boeing that meant he could hand the aircraft back after 12 months if the venture didn’t work.

Virgin has a keen eye for risks and although the group appears to take many, he stresses a theme in all their start-ups: “Our actions always spring from another principle: always protect the downside.”

One thing that the group also protects is its brand. It doesn’t matter what part of the empire you are dealing with, you know your customer experience will be slightly different to the mainstream. Sometimes extremely different. Does anyone remember the in-flight massages?

Virgin is in the throes of trying to maintain that brand in the most unlikely of industries. This year the group bought the troubled British bank Northern Rock and it is in the midst of a rebranding exercise.

Referring to that project, Branson connects the same dots. In this case, the simple mission “to do things differently for (the bank’s) customers, improving their experiences and perhaps their lives.”

One of the first initiatives? Getting rid of the glass petition between bank staff and customers.

Branson’s success puts him up there with the great celebrity CEOs, which also brings a caution. None of us are Richard Branson. We are ourselves. What the book shows us is not so much how to apply his principles, but more the power of applying our authentic strengths to running a business.

One of his just happens to be fun.