Our path to disruption: Envato 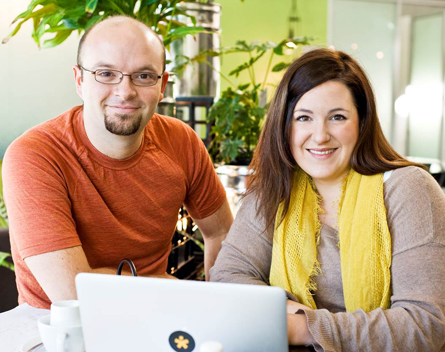 Just as well because, eight years on, company turnover has grown to more than $50 million.

“We’d been working on the business for months before it launched, and thought it would be an instant success. I remember being very disappointed with $10 in sales at the time,” recalls company chief executive Collis Ta’eed.

The idea for the business was hatched in a Sydney garage in 2006 with wife Cyan and best mate Jun Rung.

They wanted an internet business that would allow them to quit their successful freelance life and run the company from laptops while enjoying overseas travel.

Having reached their credit card limits in order to fund the startup, they found themselves having to move in with their families.

“We had gone through $30,000 to set up the business, and were freelancing during the day to pay the bills and running the business at night. It was gruelling. The hardest bit was getting the processes rolling.”

But it was clear the business was going to work. By the end of the first year, revenues rose to $1000 a week.

Today, Envato is the creator of several online marketplaces, including ThemeForest, CodeCanyon, VideoHive and GraphicRiver. All are market leaders.

In those early days, as with so many startups, marketing was a low-cost affair. They established a showroom to promote the company’s digital wares, gave away free files, invited guest bloggers to contribute content and ran a few cheap ads.

“I believe that financial constraint breeds creativity and can help you achieve your goals. We were always thrifty in our approach, and it worked sensationally for us. We’ve always had a culture of being careful with our marketing dollars. And it never even occurred to me that we could try and secure an investor,” says Ta’eed.

“We had a big appetite for remote workers, and usually hired from within our community.”

The Ta’eeds left for their overseas trip and ran the company from the road as planned, while Collis’s brother oversaw the day-to-day operations on the ground from Melbourne. The pair returned a year later to continue fanning the flames from the company’s headquarters.

The next year, the business grew five-fold, three-fold and then doubled each year for a while. The cofounders have so far resisted the lure of cash injections and knocked back expressions of interest in acquisition, proud to remain privately owned.

Today, Envato has more than 150 employees and a further 90 contractors. Ta’eed has a wall of Instagram photos in his office to help him learn everyone’s name.

But the journey hasn’t been without its challenges. The business was initially called FlashDen but, in 2009, Envato received a firmly worded legal letter from tech juggernaut Adobe, which owns the trademark for ‘Flash’. They thought their days were numbered.

“It was a terrifying letter from a massive company. But we managed to grow past it.”

Ta’eed had never worked for a big company before, and admits that one of the major challenges was learning how to hire and manage people, as well as learning how to manage foreign currencies within the business.

Ta’eed advocates the importance of a single strong brand, rather than having various sub-brands. Staying strong to the original vision despite the temptation to delve into new ideas is paramount, he says.

“I’m also a big fan of getting your startup started, rather than putting it off and waiting for the conditions to be right.”
Written by: Nina Hendy