From classroom to startup: How Matt Barnett got Verbate off the ground 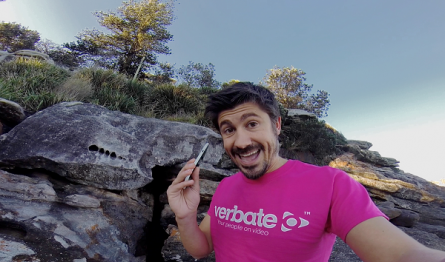 Matt Barnett had literally just stepped out of the classroom when he launched his startup.

“It wasn’t quite the next day, but it was within the same week,” he says. “Once I finished my studies, I couldn’t wait to throw myself into it after everything I had learned.”

Barnett, who gained his MBA (Executive) with the AGSM at UNSW Business School, says the opportunity to rub shoulders and share knowledge with senior professionals gave him the confidence to launch a startup that gained market traction almost instantly.

“Studying for your MBA is like a golden ticket. It gives you the chance to collaborate with key influencers, which allows you to really cut through to the top decision makers of top firms in Australia.

“Being in the classroom with accountants, tech types and other professionals has been life changing for me.”

Barnett, who lives in Sydney, says the studies were often intense, but gave him a deeper understanding of all layers of business.

“We were constantly being thrown into new teams and required to collaborate with different business cultures and experience levels. There were so many talented people in the room, it was an amazing experience.”

Barnett graduated in April 2012 and incorporated his startup, Verbate, the same week.

Barnett is now investigating facial recognition technology to help customers narrow down which video responses are most meaningful to their business.

“Our startup has changed its focus quite a bit from when we launched, as every startup does. We have the only technology that doesn’t use an app, which makes it very easy for people to give honest feedback in their own home or workplace. This means you get a wonderfully raw truth from your customers, which gives our customers far deeper insights than they ever can from focus groups.”

British-born Barnett says the journey toward his own startup began while he was living and working in London in industrial design. He had been looking opportunities to launch a startup he really believed in. After one failed startup attempt, he knew that he needed a change.

Not one to do things by halves, Barnett packed up his life and left London behind, enrolling in the AGSM, which granted him an 18 month Visa in Australia.

He was hoping that throwing himself into a new country and having new influences would change his outlook and allow him to explore new business opportunities. And it did.

“Changing my environment utterly and surrounding myself with different networks meant that very quickly I began building up new knowledge and experiences.”

During his studies, he met leaders of Australian companies like Telstra and Jetstar, which opened his eyes to new ways of running a successful business. He also met an AGSM  alumnus who went on to invest in his business.

“Enrolling for the MBA (Executive) and making the decision to further my studies has given me a completely new direction in life, and a startup with endless possibilities.”

If you’re interested in more information on the AGSM MBA (Executive), visit here.