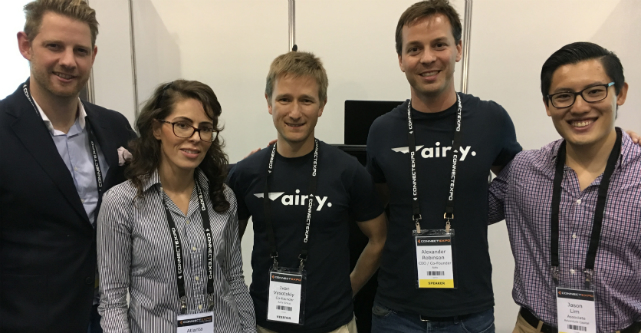 Melbourne startup Airly will soon be jetting off to Europe to compete at one of the world’s largest tech events after winning a local pitch competition.

The team won the Connect Expo Pitching Competition at one of Australia’s biggest tech expos. The competition offered local startups the chance to win an all-expenses paid trip to the Slush Finland event at the end of the year.

He says he went through it nearly 30 times.

“But there were [also] 18 months of us putting the business together and defining our value proposition,” Robinson tells StartupSmart.

With a goal to get Airly off the ground with up to 300 subscribed members signed up this year, Robinson and his team are working hard to raise funds to help them get to that point.

The team entered the competition hoping to meet other startups and more investors.

“Our focus is on 100% funding so we can launch operations in the third quarter,” Robinson says.

At the end of the Connect Expo competition, Robinson had three new potential investors.

“They exchanged contact details and asked to get in touch,” he says.

In 2015, Australian health tech startup CareMonkey won the Slush pitch bringing home a cheque for about $1 million, but later rejected the prize after discovering it was in the form of an investment.

With Slush’s mission “to help the next generation of great, world-conquering companies forward” Robinson says it will be a great opportunity to amp up awareness and exposure for Airly.

Find your own pitching style

“[SVB Group] was almost less like a startup and more like an agile tech company,” he says.

“Bumbl were very polished and they had a really cool concept.”

In the end, Robinson was able to deliver by pitching in a style he feels most comfortable with.

“My professional background has taught me to rely on more slick business-type presentations but my preferred style is much more conversational and informal,” he says.

When he realised this and shifted his approach to pitching, Robinson says he felt more confident, natural and genuine in speaking about his business.

But one thing, as for most people, never changes.

“I always get nervous,” he says.

“It’s really important to admit that because it helps me embrace that nervousness and change it to positive energy.”

To prepare for Connect Expo, Robinson, along with Airly co-founders Ivan Vystovskiy and Luke Hampshire, reviewed what questions stumped them at previous pitches and worked on improving their knowledge and responses.

He says he was able to respond very well to the business model question at Connect Expo.

“It seems to be an understandable priority that VCs and potential investors ask,” Robinson says.

But a couple of months ago, he didn’t do so well on this.

To turn this around, the Airly team asked advisors about their business model and brainstormed what makes them different, defensible and investable.

They soon identified that Airly is powered by a strong team, has low barriers to entry, first mover advantage and a high value network.

“We stress tested that with informal pitches to advisers and other startups and it seemed to pass the test,” Robinson says.

But with all this preparation, there are still questions that will be difficult to answer for new startups.

For Robinson it came down to their profit margins.

When quizzed on when they will reach profitability, what their profit margins are and what is required to get them to that point, Robinson could only refer back to facts.

“We agreed we’d just talk about what we did know,” he says.

Knowing from their data and modeling when they will break even, Robinson told judges the investment cost they had calculated to reach this point and the panel was satisfied.

“We don’t know what our profit margin will be because that’s still three years away,” he says.