Australia is still the ‘lucky country’, even for startups

It was Saturday, March 15, 2014. I was sitting at a local cafe in my hometown of Adelaide reading the paper. I had just finished voting in the South Australian Election. I remember reading the comparison of policies from both Labor and Liberal. I was so pleased to see both parties had committed $500,000 to startup community initiatives. This was years of campaigning in my role at Startup Adelaide finally paying off. 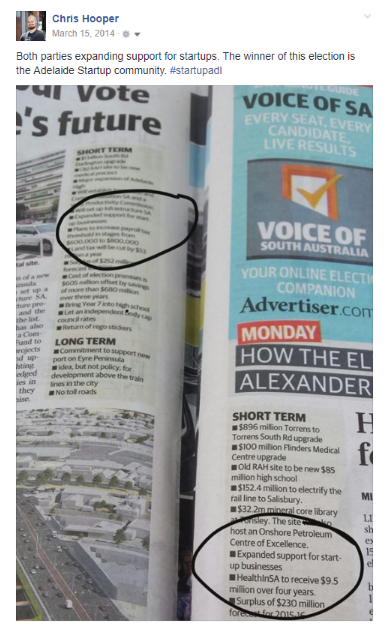 Fast forward three years. I’d since retired from Startup Adelaide, to focus on building Accodex. But so far as the startup community in Adelaide is concerned, I couldn’t be happier. The state government has now committed millions of dollars to startup initiatives. We have TechStars, our own VC fund and even Elon Musk!

It’s not just South Australia benefiting. State governments around the country have pledged millions to stimulate the tech and startup sectors. Then add the string of legislation that the came from the federal ‘Ideas Boom’ campaign. Suffice to say, Australia is in a great place policy wise.

My startup friends from overseas hear about these stories on my Twitter. They tell me they are jealous of the amount of startup welfare up for grabs in Australia. Yet for some reason, I never felt as lucky as I should. So I spoke to some other founders around the country to get their take.

What I found was that the bulk of startups don’t even know about the number of initiatives on available. I suppose as an accountant by trade and a startup advocate, I make it my business to know. I guess I expected their accountants to keep other founders apprised of the changes. In fairness, most of them are trying to keep up with hundreds of pieces of legislation.

Part of the blame also rests with the government, which could do a better job of educating constituents. The rest of the blame lies with us, the founders, for not being on top of this.

Now I didn’t write this piece to point the finger. Rather I wrote this to let you know what’s up for grabs. Here’s a list of some of the government policies that benefit startups directly:

This doesn’t even include all the state and council initiatives. Personally, I have used four of these bootstrapping Accodex. They gave us just a little extra runway to get this off the ground. That’s why I am hellbent on keeping Accodex in Adelaide now.

I want to give back to the local economy, and you should too.