Successful founders on their biggest failures and the lessons they learnt 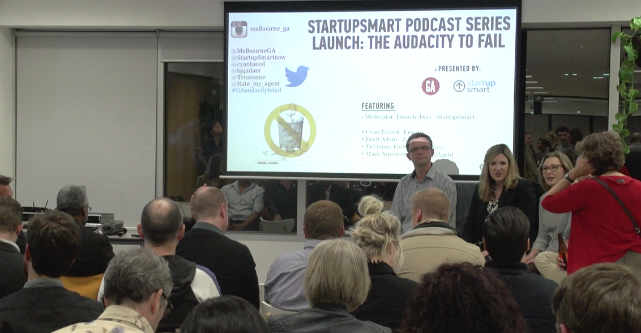 StartupSmart recently launched a podcast series to uncover how failure has impacted the lives of some of Australia’s best entrepreneurs.

As The Audacity to Fail series has unfolded, we received a flurry of new stories of failure from startup leaders, experts and new founders.

“The first big failure I had early on was managing my relationship with Qantas as a 22-year-old entrepreneur,” Bradd tells StartupSmart.

“Having never worked in a big organisation, I simply didn’t understand the nature of big business and didn’t have any experience to draw upon.

“Fairly consistently things didn’t happen the way I expected them to and had promised others they would.”

With technology advancing rapidly from 2008 to 2012 with the release of the iPhone, Bradd was soon forced to find new distribution partners and channels to market.

“We spent 16 months making the first version of our software and the world moved on before we’d finished,” he says.

“It taught me to use the Lean Startup approach and agile software development so that I could learn with minimal impact.”

Bradd’s early hardships have also made him a better decision-maker.

“When you make promises or decisions that simply don’t work out it is a terrible feeling and I hate letting others down,” he says.

“I have since learnt to make decisions based on logic rather than being emotionally driven – emotion has a tendency to cloud perception and judgment.

“I do this by stepping back for a period of time and thinking about each decision before responding.”

Have tech talent on your executive team

RedEye co-founder Wayne Gerard has started seven companies and is the first startup founder to be appointed to the Queensland Premier’s Business Advisory Committee.

“In each company, I have learned heaps of lessons and I’ve invested lots of money that I didn’t intend to invest, in essence, making mistakes and learning from them,”Gerard tells StartupSmart.

One of his many mistakes came at Red Eye when he realised the importance of having a product manager.

“I had some developers but I gave them too much responsibility,” he says.

“Now we run product management at a business level and strategically, not just at a technical level.”

Do due diligence on investors

QUT Creative Enterprise Australia CEO Anna Rooke has dedicated her life to empowering startups in the arts sector with the right skills and support to realise their goals.

“Typically, I tend to see challenges of raising capital for the first time, underestimating how long that can take [and] getting traction,” Rooke tells StartupSmart.

“My husband and I had our own tech startup in the UK.

“It’s part of the reason I work in this sector – to help other startups.”

Their most fundamental lesson comes down to knowing investors.

“We didn’t necessarily do as much homework on our investors, we had different philosophical values which affected direction,” she says.

“Doing due diligence on investors is the number one thing I always emphasise.”

Additionally, founders should create a strong support system around them of people who understand the sacrifices it will take to build the company.

“Being really clear on just how much it takes to run a startup and how all-consuming it is on your life – sometimes family and friends can find that really challenging,” she says.

When shit hits the fan, focus on a solution

As a first-time founder, he says failure has been an ongoing part of the journey.

“I remember five years ago, we had an almost one day long outage.”

The impact on its millions upon millions of users was crushing – many who would have been entering important meetings with clients, investors and the like only to discover they can’t access the presentation they’d prepared.

“It’s not just about losing the money or the income of that day, it’s more about making people angry and disappointed,” he says.

To address the issue, Halacsy and his team held a “post-mortem retrospective” meeting.

“[We said] okay, let’s come to the room, leave your ego behind and we should focus on how we can make this better for the customer, not to blame or point fingers,” he says.

Taking this approach helped them review their priorities and where they should focus engineering efforts to ensure the platform could continue to keep up with its fast growing demand.

What customers want is a known unknown

Halacsy and his team learned this very recently when they released a new iPhone app for Prezi.

“It lets users create a story in slow motion by taking pictures for 20 seconds and we loved it, we really, really loved it, but people didn’t,” he says.

It was a little reminder to Halacsy and his team that you can never be too sure about what customers want.

“It’s kind of easy to make bad decisions about a product,” he says.

Get real on revenue and the big picture

Before landing on its unlimited live concert membership model, GiggedIn founder Edwin Onggo says they had to pivot.

“We created this model where we crowd-sourced the locations of the bands,” Onggo tells StartupSmart.

“We allowed fans to choose which cities this band should play in when they came to Australia.”

They put a lot of resources into building out this platform only to realise too late it wouldn’t be easy to grow.

“We had a lot of success with one tour with a band which had a million fans at the time but we over invested in our technology and time [instead of] looking further down the track in how this model could scale,” he says.

This is a critical lesson for any startup, he says.

“Look at your ability to scale the sales process and have good forecasts on what sort of revenue it will bring, that’s something we could’ve done in literally a day two but didn’t,” Onggo says.

With the ultimate aim of boosting the number of sell-out shows across Australia, Onggo says their new model is much more effective and helping them achieve this outcome with limited marketing effort.

“Stay very passionate and focused on the problem you’re solving but don’t get attached to the solution,” he says.

Uncover the lesson in each defeat

“I don’t believe in failure anymore, I never fail because I either win or I learn something new that will help me win next time,” Ebinum tells StartupSmart.

This epiphany hit Ebinum 10 months after he founded Seed Digital.

“We lost the chance to work on a new project with quite a large client because of some mistakes we made,” he says.

“At the time I felt a little defeated.”

But the experience has made him stronger as an entrepreneur.

“Taking the feedback we got from the experience and using that to review and improve our processes to ensure that the same mistakes didn’t get repeated in the future meant we didn’t dwell our focus on that particular ‘failure’, we just learnt from it,” he says.

“Sometimes you have to change your perspective to change your experience of a situation. I look to see what I can learn from a failure or mistake rather than dwelling on the fact that it didn’t work out.”

Learn, share and grow together with founders who have failed

When talking about failure, many guests on The Audacity to Fail and leaders in the space have stressed the importance of what is learned through failures.

“As a community, we should be encouraging entrepreneurs to try,” Rooke says.

“They may need to pivot and run four to five companies before they get the right commercial model.”

Gerard adds that failure is always a growth opportunity.

“We run the risk in Australia of embracing this concept of fast failure and actually encouraging people to fail where I think it’s more about not failing [but] very quickly and consciously and continuously reassessing the impact and status of the decisions you make to maximize the opportunity and minimise the risk,” he says.

“As startup founders in the Australian ecosystem at this particular point of time, there isn’t a lot of experienced people. Let them make decisions and learn from potential mistakes.

“We have a responsibility to help people learn.”

Listen to more stories on failure from Shark Tank’s Steve Baxter, Boost Juice’s Janine Allis and more on The Audacity to Fail podcast.

Have you failed at something? Tell us what you learned in the comments.