BigCommerce impresses in stock market debut, but its founders had to overcome fear in the early days 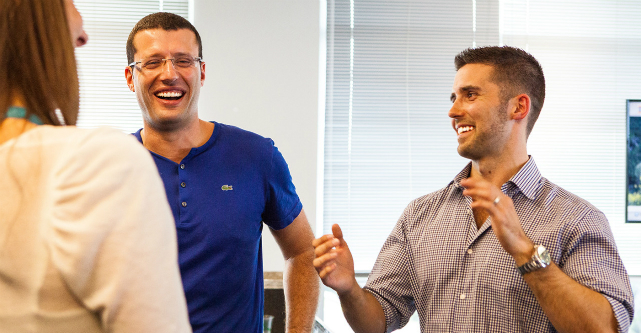 Homegrown tech success story BigCommerce has made its debut on the NASDAQ, impressing the market as its shares climbed by more than 200% during its first day of trading on Wall Street.

Nine million shares in the e-commerce platform were priced at US$24 apiece in an initial public offering that valued the company at US$6.5 million ($9 million), reports The Sydney Morning Herald.

By the end of the company’s first day of trade, the shares closed at US$72.27, having reached as high as US$91.80 throughout the day.

Wall Street is a long way from Sydney in 2010, when founders Mitch Harper and Eddie Machaalani launched the business out of their previous startup with about $10,000 on their credit cards.

In the following article from SmartCompany’s archives, published in February 2014, Harper spoke about how the duo overcame their fear of raising capital.

E-commerce platform BigCommerce is booming. It has passed 50,000 paying customers, has a team of 300 and has raised $75 million to fuel its ambitious growth plans. But to reach any of these goals, its founders had to overcome their fear of raising capital.

Mitch Harper told StartupSmart the biggest challenge he and co-founder and co-chief executive Eddie Machaalani have faced in their startup journey was battling through their fears of taking on external capital and growing too quickly.

“The idea of raising money was scary because we hadn’t done it before and we had seen you could have massive success if you took the risk but also massive failure grew too quickly and let it kill you,” Harper says.

BigCommerce grew out of one of the six products in Machaalani and Harper’s earlier startup. Launched in 2010 with about $10,000 worth of credit card cash, Harper says transitioning their approach to the business was hard.

At the time, they had over 10,000 paying customers and reached profitability with a team of 10 in Sydney and 20 in Austin, Texas.

The executive team had been batting away advances from US venture capital groups for over a year.

But some of them kept calling.

“Eddie and I kept talking about it, trying to overcome the fear of getting big and turning into a boring enterprise rather than a fast start-up. In the end, we decided to go all in.”

With their sights set on becoming a billion-dollar business, they knew they’d need investment to grow. But they had a lot to learn first.

Harper says they’d never known a VC, had no idea what they wanted to hear, which metrics they’d be interested, or even how to build a pitch deck.

After trawling through their inboxes to find all the contact details of the investors who had reached out, the pair booked a two-week trip to the US.

They received over 15 invitations to pitch and planned to spend a week on the west coast followed by one on the east coast.

After a week of pitching in Silicon Valley, they headed to their first pitch on the east coast with General Catalyst.

The meeting went so well they had a term sheet the next day, which they signed for a first investment of $15 million in July 2011.

With the cash heading into their account, Harper and Machaalani flew back to Sydney and began to implement the plans they’d developed to keep their company true to their values.

“Once we got over that fear, we really changed our mindset from how do we avoid needing other people’s money to how do we become a billion dollar business quickly, and put a Sydney start-up on the map for doing exactly that,” Harper says.

Their chief concern was maintaining their company culture, a challenge complicated by the fact both founders wanted to stay based in Sydney while their Austin team took off.

Beyond “spending appalling amounts of time on planes”, it was taking the time to find the right executive team that has helped keep them intact as they’ve grown to 300-strong.

“Growing your business from tens to hundreds can kill you if you don’t have the right strategies and management,” Harper says. “We knew hiring the right people was critical, so we agreed on a no-jerk policy we still have today.”

The commitment to never hiring someone they wouldn’t want to grab a beer or glass of wine with became the guiding principle as they invested their first round of $15 million into launching marketing campaigns and growing the team. They added over 70 people to the team in under a year.

“Once you’ve got them, trusting them is make-or-break. Our CFO Rob is the perfect example. He’s based in Austin and he’s not the typical bean counter, he’s the cultural beacon of the business,” Harper says.

BigCommerce plans to hire between 100 to 150 new staff in the next year. It has also got a new product launch coming up and almost $3 billion of payments processed through the site.

Harper says in retrospect it was self-doubt that held them back.

“The biggest fear and doubt we had was if we were really a viable business that someone would want to put millions into or maybe it was all in our heads and we were kidding ourselves.”

While all the external funding and over half of their team are based in the US, Harper says they’re committed to building and exiting the company from Sydney.

This article was first published on February 20, 2014.