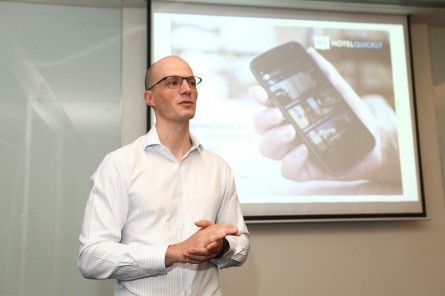 Serial entrepreneur Christian Mischler had a secure job with food delivery platform Foodpanda when he made the scariest decision of his life.

The US-based co-founder and COO of the globally expanding company decided to leave and join a brand new startup – HotelQuickly, which offers last-minute well-priced accommodation.

“It hadn’t even launched yet,” Mischler tells StartupSmart.

“It was leaving something that I really liked doing and moving onto something with higher upsides but a lot more risks as well.

“It worked out but it could have gone the other way.”

The biggest challenge with startups

After starting up businesses in a wide spectrum of industries, from publishing to hospitality, Mischler says the biggest challenge is being able to shift mindsets when scaling quickly from a small team of three co-founders to a company of a hundred people.

“It’s more an internal change to create a machine that is ready for growth,” he says.

Mischler says this involves changing processes, being able to delegate and building operational structures for growth.

“I’ve learned a lot and made a lot of mistakes,” he says.

“You have to go through the growth to learn what to do and how to do it better next time.”

Since its Australian launch, Mischler has been instrumental in driving up HotelQuickly’s reach.

“We grew from having no hotels basically to over 6000 hotels,” he says.

When he last spoke with StartupSmart, they had closed nearly $6 million in Series A funding and gained more than 50,000 Australian users.

Today, they have over 200,000 and are driving up recruitment in Melbourne and Sydney to grow this faster.

At HotelQuickly, Mischler says they take a “mature approach” to employer-employee relationships.

This means flexibility and freedom with choice of work hours and location.

“I don’t care if they work from the office, from home or the beach, as long as wherever it is makes them feel inspired to perform to the best of their capabilities,” he says.

Passion from a young age

Mischler’s passion for startups began in his teenage years.

He was just 16 when he launched his first startup – a small web design company – with a fellow high school student.

“We sold completely overpriced websites and HTML sites but it was great in high school to make a bit of money until a SME we sold a website to realised that they’re completely overpaying us,” he says.

The tiny company remains open to this day.

“We just hold it for the sentimental value,” he says.

Mischler’s habit for starting up companies grew with him through his education and he helped build one of Switzerland’s largest education publishing houses while still at university.

He then joined Credit Suisse as a consultant but soon grew weary of the corporate world.

“If you leave before 7, then your colleagues just look at you like: ‘why are you leaving so early?’” he says.

“I knew I’m not meant for a large corporation.”