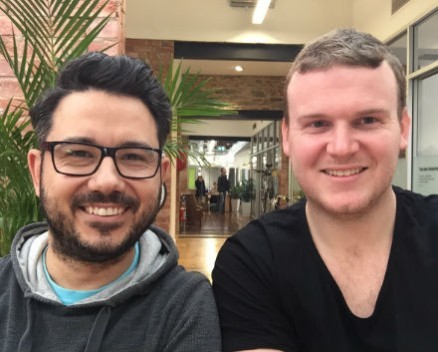 A $1 lemonade icy pole led two young Adelaide-based entrepreneurs to create an app that allows users to reward people for acts of kindness by sending them a “thanks” along with a small donation to their charity of choice.

Good Thnx launched last week and over 1000 people have already used the platform to show their gratitude for the good deeds done by others.

The idea spawned from a hot summer’s day when Ante Juricin bought his workmate Shannon Poulton an icy pole out of the blue.

“That’s what really started the thought process. We were saying, ‘how can you get someone to repeat that good deed? How can you say thank you in a way that motivates them to do it again?’” Poulton says.

“That’s where Good Thnx came from.”

The app allows users to send a short message and micro-donation over 10 cents to someone to reward them for an act of kindness.

Users simply enter the email of someone who has done a good deed, along with the message and a preferred charity. The recipient can then select which charity they want the money to go towards.

If it isn’t allocated after two weeks, the donation goes to the charity the sender recommended.

After not being able to find a service that properly matched what they wanted to do, the pair decided to build their own backend payment system.

“The way things are done really didn’t sit well with us,” Poulton says.

“There are companies operating on a for-profit basis, sometimes taking upwards of 10% of a donation for profit.”

Poulter says that with their system, 100% of donations actually go to the charity. Although there are currently service fees of 2% for donations under $50, and 1% for donations over $50, they hope to one day make it a 0% platform so no extra fees are placed on the donor.

The pair also created the Good Thnx Foundation, a not-for-profit public ancillary fund for the startup.

The online charity donation space is getting crowded, but Poulton says their startup is unique due to its backend system and focus on micro-donations.

“In Australia, micro isn’t really that micro, it’s usually $4 and above,” he says. “We want to be the total other end of that. If someone wants to give 10 cents we want them to be able to.”

The startup is using technology to create change for the better in society, Noble says.

“Good Thnx is based on the simple, yet powerful idea that technology can be a tremendous force for good, by creating something extraordinary from ordinary deeds performed every day,” he says.

Five charities, including World Vision Australia and WWF-Australia, have already signed up to the platform, and Poulter says they’re getting emails every day from more that want to be involved.

The startup was bootstrapped initially by the duo and they closed a seed funding round of $300,000 last year.