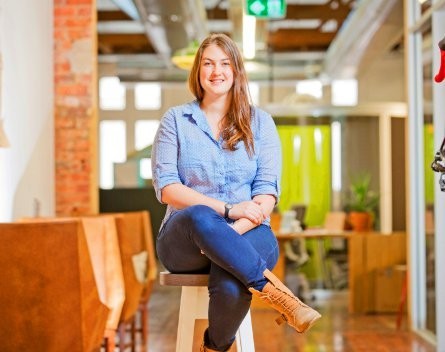 Five start-ups, three sole founders and two co-founder pairs all under 25 years of age, began the program in September. Two had prototypes while three were still in the ideas phase.

“We wanted to retain the start-up talent and stop the brain drain to Sydney and Melbourne so offered a program to connect really smart and focused founders to the community,” Schilling says.

The start-up founders selected got six months of free access to the office, tickets to all training events and a mentor.

“It’s a very unstructured program on purpose, because they’re all very capable and we’re just enabling them to be part of the community, which otherwise they may not have been able to afford,” Schilling says.

Joseph Costa and his co-founder joined the program with a developed product but were struggling to access the right beta testers.

“Before the Hub, we had a product but now we have a product real people actually love,” Costa says.

The app delivers updates to shoppers when they move into the GPS range of shops. The iPhone app has been approved by Apple, and will launch alongside the Android app still under development in a month.

“We were struggling to talk to people in the right places, and not getting a lot of traction,” Costa says. “We had a great product but not the right networking going on. But at the Hub, the people we meet all the time are wiling to help out, and we’ve really taken off.”

The start-ups will pitch to the wider hub community at the end of February. They will start recruiting for another batch of founders in March for a winter program.