Whatever Flotes your boat: Life lessons from a serial Australian entrepreneur 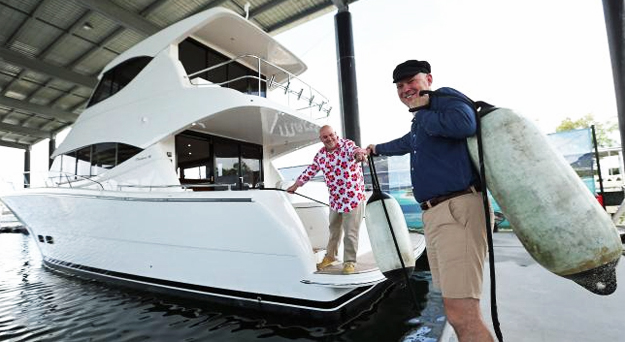 A Queensland entrepreneur who created a floating share market for boat hire says failure is a crucial part of the startup journey.

Flote founder Jonathan Bouzanquet says he has been an entrepreneur for most of his life.

“I have ideas that are much bigger than my budget,” Bouzanquet tells StartupSmart.

“It would have been nice to have rich parents.”

Float is a share-market platform for boat owners or “captains” to trade boating experiences by hiring out their vehicles to “voyagers”.

“It’s about two groups of people: people who own boats and people who don’t,” he says.

A serial ideas man, Bouzanquet stresses the importance of being realistic and resourceful.

But just staying positive can be foolish, he says, unless you have a certain level of realism and are constantly checking your balances.

The life of an entrepreneur is filled with ebbs and flows, so these are the key principles he lives by to keep a-Flote.

While many people speak about the importance of embracing failure, Bouzanquet says not many truly believe it.

Having been through many failures over the years, Bouzanquet says they are a critical part of building wisdom and experience in how you do business.

According to Rate My Agent, it recorded just $3 million in private residential sales last year.

“We started in a country town and went from no sales to some sales to regular sales,” he says.

That’s when they plateaued unable to generate sufficient sales to increase profit margins and grow further.

In hindsight, he says, they picked the wrong location in the Sunshine Coast, which did not ride the upward spike in residential property prices like Sydney and Melbourne.

“If Flote works, I’m going to do a whole speech on failure,” he says.

Bouzanquet says a strong business relationship is similar to a good marriage where the partners involved complement each other well.

“I’ve purposefully taken on a business partner that’s a lawyer,” he says.

Linking with a partner that has legal expertise and extensive maritime experience has been invaluable for the development of Flote.

“I’m a broad brush ideas guy and he’s the cross the t’s and dot the i’s guy so together we’re great,” he says.

Bouzanquet says this brings excellent credibility and application for their product.

Bouzanquet says he and his wife, Amanda, developed the Float website themselves by spending their entire Christmas break watching YouTube tutorials and learning new skills.

Bouzanquet says with the multitude of online tutorials and access to website development tools it’s possible to build impressive sites.

“I’m one of those people that just can’t stop,” Bouzanquet says.

Bouncing from idea to idea, he says it can sometimes be taxing on his family.

“They’re like why can’t you just get a normal job with a company car,” he says.

Bouzanquet knows he’s not suited for that lifestyle but he is aware of his limits.

If it feels like you are turning into a “maniac” to get through your to-do list, Bouzanquet recommends amending your goals and plan of attack to have less impact on your closest connections: family, friends and relationship partners.

“Don’t destroy your family to be successful,” he says.