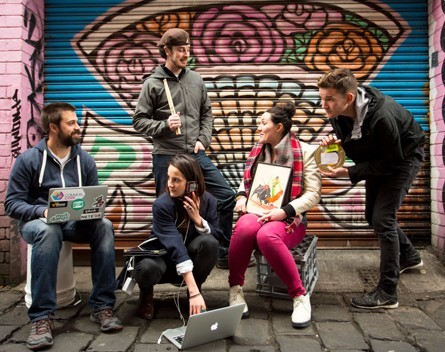 Teresa Truda was in the office of her Melbourne ad agency at 10pm when she came up with the idea for her startup.

She was regularly working16-hour days and travelling for her work, and missed the personal touch on these long trips away from home.

Truda had a waxing session with her usual person, Linda, the next morning, but had to forgo this for the work trip.

It was this concept of bringing along the personal touch from home for a business traveller that led to the creation of AFTR.

“I literally wanted to pack Linda up in a suitcase and bring her with me so I could get the service that I’m used to in Melbourne,” Truda tells StartupSmart.

“I was frustrated that I couldn’t get the particular personal service at the time I needed. The idea came from being time-poor and not being able to get services done.”

Along with co-founder Zia Word, Truda has created the AFTR app, which will allow business travellers to find, book and pay for personalised, curated professional services on-demand within an hour.

It’s billed as a “smart little black book” for travellers, with information for every service a traveller might need, tailored specifically to their needs and preferences.

Word says it’ll work through a combination of human curation and computer learning.

“Anywhere you go you can trust us. It’s for personal services on demand, curated by someone you trust in a city you don’t know very well.”

“It’s like having Linda from Melbourne with you in Austin.”

Although there are already many options to help visitors find the best cafe or local gym, Word says the fact that AFTR is targeted at business travellers and grows to learn what the user likes that sets it apart.

“When you get to a city you could start following Yelp or you could ask the hotel, but that’s always based on someone else’s idea of what’s good,” Word says.

“We’re basing it on your own idea and moving with that person wherever they go. It’s the inside contacts for wherever you are, the little black book targeted at business travellers.”

The startup will be partnering with a number of small boutique businesses in the APAC region to achieve this. It’s in a private beta at the moment, and the founders aim to publicly launch it early next year.

It’s all been bootstrapped by the co-founders so far, but an investment round will be opening soon.

The co-founders are speaking from Taiwan, where they’re about to take part in the Asia Super Team competition.

AFTR is representing Australia in the contest for businesses in the Asia region, with the team participating in activities and judged via public voting.

It’s an exciting opportunity for the startup to test the waters in its target market, Word says.

“Asia is a market that we’re really keen to focus on,” she says. “It’s quite close and there are plenty of business travellers in the region.

“It’s about learning about Taiwan and what can be achieved, and also so they can learn about us.

“We don’t know what to expect as well so there’s that element of surprise.”