Apple reveals new devices: We are at “peak mobile” and it’s the software that counts 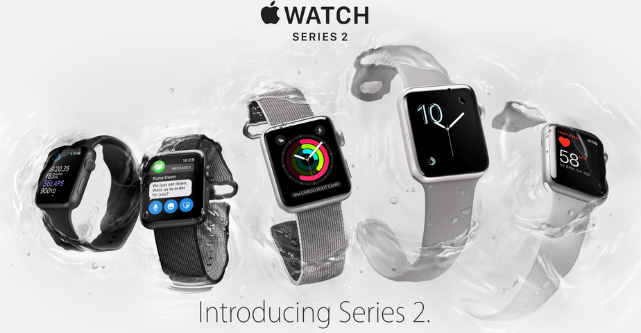 Apple announced its new iPhone 7 and 7 Plus and Watch Series 2 today at the Bill Graham Civic Auditorium in San Francisco.

What the event confirmed was that the leaks about the phone and the watch have gotten to the point that there were very few surprises. The new features of the phones can best be seen in Apple’s comparison chart which is interesting from the perspective of how much is the same between the 6S and the 7.

For people who have an iPhone 6S, there is little in the new phones that would be compelling enough to upgrade. The phone is slightly faster, the battery will last a little longer (a claimed 2 hours extra) and the camera slightly better.

There are a couple of new colours and the phone now comes in a version with more memory (256 GB). The phones are now dustproof and “splashproof”.

Physically, the biggest changes are the disappearance of the headphone jack and the replacement of the movable home button with a fixed trackpad-like device with “taptic” feedback. The new phones will come with earbuds that have a lightening connector. An adaptor will be included to convert the old jack to the lightening style and new wireless AirPods will come as an optional accessory item.

The bigger changes came with the new Series 2 Apple Watch. Again, not in terms of design or new physical features but that it is now waterproof and can be worn whilst swimming. There is a GPS chip on the Series 2 watch now as well which allows the device to track runs and give directions without needing to use the phone.

Again, there are general upgrades for power, graphics, screen, and processor speeds.

What we have seen with the new device announcements is the same thing that has happened in the case of tablets and PCs generally. There is very little that will change with the physical appearance of the mobile devices we use from year to year.

Each year they will get a little better and if customers happen to be at the point of their device upgrade cycle that warrants a new phone, they will upgrade, but otherwise, there will be little to distinguish one year’s devices from the next.

What is happening however is that the capabilities of the software that comes with the phone is continually improving and this is going to be more significant in the end. The bigger step change has come with the new versions of iOS and WatchOS and the features that were announced at the annual developers conference in June of this year.

Enhancements to the capabilities of Siri for example and its availability to app developers is a big step because it will increasingly bring new forms of intelligence and interactivity to apps that we use on our mobile devices.

What we are increasingly seeing is greater sophistication being brought to the software that runs on mobile devices that are transforming them into personal health, research, education and financial platforms without the need for new sensors or other hardware.

Where hardware in the form of new sensors is needed, they can be added as separate devices rather than needing to be built into a watch of phone.

iOS 10 and WatchOS 3 will be available for download and installation on the 16th September.

The impact of the new devices?

Apple will continue to do well from sales of the new devices. It will do little to stem the diminishing overall market share to Android however as that is being driven by the massive range of capable, and cheaper, smart phones coming out from other manufacturers.

From a stock market perspective, the leaks on the new devices had already been “priced in” to the current share price and so this barely moved on the announcements of the new devices.

Should you trade up?

For people with an iPhone 5 or iPhone 5S, the answer would be a categorical yes. For those with an iPhone 6 or 6S, no, not unless your phones were really in need of replacement. For Apple Watch users, again, probably not worth upgrading unless you are a swimmer and want to wear the watch in a pool, or simply can’t shower unless you have a watch on.

Of course, for those that upgrade devices each year, Apple has obliged by providing something new to buy and they can always use the excuse that their old devices will go to another family member or friend.

Pre-orders for the phones and watches begins on the 9th September and devices will ship on the 16th September.