Are you going to San Francisco? The answer is yes for 20 startup tyros 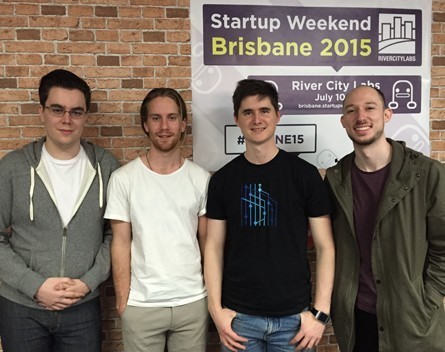 Twenty budding Queensland entrepreneurs will soon be learning from the likes of Facebook and Apple, after being chosen to take part in River City Labs’ Startup Catalyst trip to San Francisco.

The young participants were selected from 131 applicants, and will visit Facebook, Apple, Twitter, 500 Startups and take part in a Startup Weekend in San Francisco.

Included in the list is half of the team at meVu, a pre-launch Brisbane e-sports betting platform, with co-founders Adam Hibble and Kevin Upton to jet off to the US in September.

“We were just happy to be shortlisted, so we’re over the Moon at the moment,” Hibble says.

“One of the most exciting parts is the 19 other people I get to go with, the talent there is incredible.”

The pair, along with two other co-founders, hopes to soft-launch their startup within the next six to ten weeks.

Project manager Colin Kinner says the trip will help show the entrepreneurs what they’re up against.

“It’ll help them figure out what it means to run a startup, and expose them to a really mature startup ecosystem so they can see what they’re competing with in Australia,” Kinner says.

“They’ll see the talent and scale of ideas and ambition, and a get a sense that there’s a level of intensity that’s needed. It’s not a nine-to-five activity.”

This is one the most exciting aspects of the trip, Upton says.

“It’ll be good to see what the culture is like. It’ll be an amazing, eye-opening experience.”

The final participants were selected mainly because of their potential and proven skills, Kinner says.

“They’re 20 people I’m very confident would be awesome CTOs or CEOs,” he says.

“We wanted a genuine interest in startups and we weren’t interested in taking people who wanted a holiday in San Francisco.”

“We could easily have taken 30 or 40 people on this trip. There were that many really smart, capable and entrepreneurial individuals. We had to make some pretty hard choices.”

The number of applicants is up by more than 25% from last year, the first time the program ran.

The trip to San Francisco will take place from 28 September until 7 October.

The returning entrepreneurs will bring back new lessons and skills that can be passed on to the Australian startup community, Kinner says.

“Every single one was impacted by the program. They brought that back and are doing a startup or are engaged with the startup community,” he says.

“Success in this program means impacting a whole lot more than the 20 people that came on the trip. A measure of success is how widely the learning is being spread.”

“I’m looking forward to witnessing how the experience further equips and teaches these emerging entrepreneurs,” he says.

“Queensland’s startup scene will certainly be better for it.”