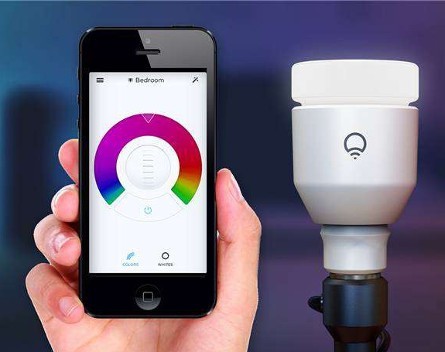 Everybody is talking about the Internet of Things.

Australia’s emerging maker movement is the “light behind the storm clouds” for the Australian manufacturing industry, according to a recently released Deloitte research paper.

“The emerging maker movement is the new mineral to mine and the future of industry in Australia,” the paper says.

Alfred Lo of Optus Innov8 seed, organisers of a recent Internet of Things event at Sydney’s Vivid Idea’s Festival says the traditional barriers to entry like the cost of tools and prototyping are becoming smaller and making IoT more accessible. Apple’s announcement around HomeKit also got people excited.

And we’re now seeing new hardware co-working spaces popping up, like this one in Sydney.

So here are our top 10 Australian companies to watch in this space.

1. LIFX: A Wi-Fi enabled, multi-colour energy efficient LED light bulb that can be controlled with your smartphone. It recently won the top award for smart systems in the consumer goods category at the 2014 Edison Awards. It also remains one of the most successful Kickstarter campaigns ever run.

2. Smash Wearables: The world’s first digital tennis coach. The company has developed a lightweight wristband which is worn whilst playing tennis and feeds information back to an app which provides technique analysis and personalised recommendations.

3. Moore’s Cloud: Has developed Holiday, the world’s first connected, intelligent set of holiday lights. The lights can display countless patterns and can be controlled by apps available on a smartphone, tablet or web browser.

4. Wearable Experiments: Caused a buzz when they released Fundawear, a set of vibrating underwear which allows couples to remotely control their partner’s underwear. The startup is focused on incorporating wearable technology into clothes but not at the expense of fashion.

5. Ninja Blocks: They’re on to their second successful Kickstarter with the Ninja Sphere, following the success of the original Ninja Blocks. Ninja Sphere uses data from your devices, environment, and location to advise you intelligently and give you control only when you need it.

6. WattCost: Using a device which is attached to electricity boxes WattCost provides home and businesses owners with real-time updates on energy efficiency and steps they can take to improve that efficiency.

7. Catapult Sports: A wearable device for athletes that feeds data from a variety of sensors to an app. It is being used by sports teams round the world as a tool to help prevent injuries.

8. LEAPIN Digital Keys: Has developed smartlocks, locks which are controlled by your smartphone. Enables the use of digital keys which enable users to control who can access the locks at certain times.

9. Homeboy: It’s billed as the world’s most accessible home security system. Based in Sydney and Austin, Texas, Homeboy’s simple hardware and apps have won a number of industry accolades including an Australian International Design Award, Powerhouse Museum Design Award and CES Honoree.

10.GoFar: Using an in-car display and phone app, GoFar makes it obvious how to subtly change your driving style to save fuel and money.