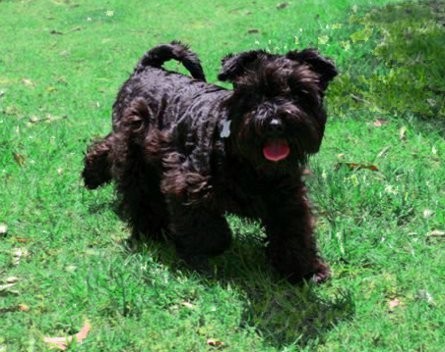 He decided to move back into start-ups after looking for work and being told by larger companies that he was “too entrepreneurial”.

Deveraux-Stanford had previously worked as a real estate entrepreneur in Sydney, specialising in luxury properties valued at over $3 million.

After selling his real estate agency and moving to Melbourne, he struggled to find work with established real estate firms who were nervous about hiring an ex-small business owner.

“It was hard to find work here. I kept being told I was over-qualified and too entrepreneurial, and wouldn’t work in a large corporate company,” Deveraux-Stanford told StartupSmart. “So I thought if no one is going to invest in me, I will, so I got stuck into this idea.”

His new start-up idea, Ivory Coat Companion Goods, was born in October last year, when he saw a gap in the market for products for sensitive-skinned pets.

“I have miniature schnauzer, Cooper, who has very sensitive skin. I went to one of the large chains looking for a less harsh product,” Deveraux-Stanford says, adding that he couldn’t find any products with all-natural ingredients. “I thought we needed to do better, and we could, so we did.”

Working with a team of chemists and veterinary microbiologists, he developed a line of seven all-natural grooming products for sensitive animal skin.

The products are already selling in boutique pet stores and vet clinics in Victoria, New South Wales, Queensland and Western Australia. Deveraux-Stanford has signed up a Victorian distributor and is fielding inquiries from London.

“We’d like to stay boutique, as that’s our brand. It’s not necessarily for a Woolworths or Coles. The perception of brands matter, so we’re focused on groomers and vets for now,” Deveraux-Stanford says.

“I know we’re competing against large players in the industry with brands that are owned by Mars, Proctor & Gamble, Nestle and Blackmores. These are not small companies, and there are only a handful of small boutique brands doing well.”

Market research group IBISWorld says the Australian pet products and services industry earned about $6 billion in revenue last year and has grown by 0.9% each year since 2008.

IBISWorld says in a report that “over 60% of households own a pet, with over 50% owning either a dog or a cat”.

“Over the past five years, owners have become more concerned about the health of their pets, spending extra on preventive and elective veterinary services. At the same time, they have been able to pamper their pets due to rising wealth and disposable income,” it says.

“We’d like to be international by the end of the year, but our focus is on building up a presence in Australia first,” Deveraux-Stanford says. “But access and support from the China office is really exciting for us.”