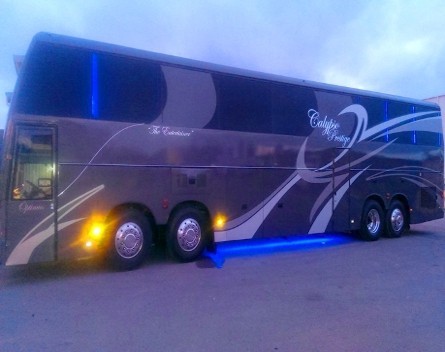 Australian entrepreneurs will soon have the chance to conceive and launch their own startup with a group of strangers on a bus, thanks to an incubator on wheels which is coming Down Under for the first time.

StartupBus, which is marketed as one of the “most intense” startup competitions in the world, will be held in partnership with this year’s SydStart – Australia’s largest professional tech startup conference.

Founder Elias Bizannes told StartupSbmart the event will be about bringing people together and getting them out of their comfort zone.

“StartupBus is an international community of developers, designers, and marketers better known for the annual competition we run that inducts new people into our community, whereby you need to conceive, build and launch a startup on a bus travelling at 80 kilometres an hour in 72 hours with a bunch of strangers,” he says.

“The purpose of StartupBus is to empower the people who can disrupt the status quo so that it leads to higher quality life for us all.”

The idea for StartupBus came when Bizannes, who is now based in San Francisco, was at his farewell drinks in Sydney in 2009 and joked about launching a startup after going on a roadtrip. Five years later, teams of “buspreneurs” have made their way across America and Europe and developed viable business ideas and raised millions of dollars in funding.

Bizannes says he originally started StartupBus as a way of helping the Australian tech scene grow, so bringing the incubator to SydStart will be a bit of “closure”.

“I tried again in 2011 to make a dedicated bus of Australians but demand was so high we didn’t get around to it,” he says. “And then we launched in Europe and Africa, and it only seemed natural that one day I would bring this back to Australia combined with the five years of knowledge and networks I’ve developed since moving to Silicon Valley.”

The Australian StartupBus will depart Sydney on August 29, before returning for the SydStart conference on September 2. Up to 23 entrepreneurs will then pitch their ideas in front of 2000 people.

Bizannes says what makes this venture different from previous ones is that both he and the global director of StartupBus, Mitch Neff, will be “conducting” the bus. The result will be some “pretty hard-core mentoring”.

“What I want to do is seed it for what year three will look like of us having operations in Australia,” he says. “The event this year will simply be a taste for what it could become in future.”

To those considering taking part, Bizannes’ message is simple.

“There is absolutely nothing rational about wanting to get involved in this event,” he says. “But I promise you, this will change your life.”

Applications for StartupBus are conducted on an invite-only basis. You can contact the team and pre-apply via their website.