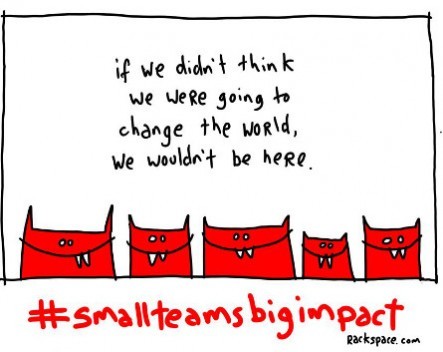 Cloud technology company Rackspace has this week launched a competition to take an Australian or New Zealand start-up to Silicon Valley for a two-week investment trip.

The winner will also be interviewed by Rackspace’s international start-up liaison Robert Scoble and promoted online.

This is the first time Australia and New Zealand have been part of the Small Team, Big Impact awards. The awards include a round-trip to San Francisco and meetings with investors.

Start-ups at any stage of development with fewer than 10 team members can pitch for the opportunity.

Angus Dorney, the general manager for Australia and New Zealand, told StartupSmart they were looking for companies that were making waves in the market.

“The best way to describe what we’re looking for is we’re after disruptive companies, those that are really embracing tech in new ways that will disrupt industries,” he says.

“It doesn’t matter if you haven’t raised or made a dollar, we’re looking for companies already impacting their markets, and their potential to keep doing so.”

Applications close July 26. Ten finalists will pitch to a panel of entrepreneurs at Sydney co-working space Fishburners on August 6.

Dorney says Australian start-ups have led the world in their adoption of cloud services and are set to benefit from the growing opportunities it provides.

“Cloud makes a lot of sense for start-ups, because you don’t need to outlay the capital to get started,” he says. “If you look at the tech opportunities in the cloud that are coming to start-up companies, there is an increasing amount of functionality available now.”

How to protect your e-commerce business from fraud