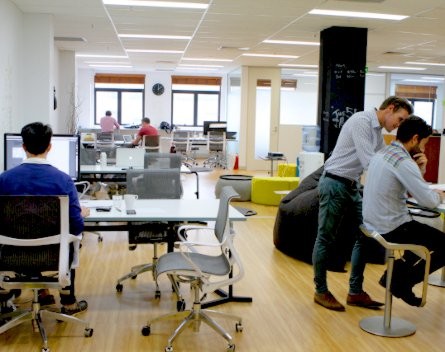 Newly launched co-working space WeCo is trialling a new pricing model whereby members’ fees are determined by their level of collaboration and shared value within the space.

WeCo, which opened its doors earlier this year, is located in the Sydney suburb of Edgecliff. Founder Joel Hauer describes it as a drop-in co-working space for consultants, freelancers and start-ups.

In a bid to honour the concept of collaborative working, WeCo is trialling a new pricing model.

“People have come through and we’ve slowly filtered them out because they’re not about collaboration. They want a private space and think of it as a serviced office,” Hauer told StartupSmart.

“What we also found is that a great incentive is money.

“What we’re going to be trialling over the next couple of months is pricing based on how much you can add to the space, so what value you provide to other people here.”

Hauer says members’ fees will be determined on a case-by-case basis.

“[We will be] sitting down with them, understanding their business – where they see themselves going within the next 12 months or 24 months or whatever it might be,” he says.

“Then we’ll be giving a free trial to people… over one or a couple of days, just so we can see how much they’re able to be open to other people working here.

“There’s also a WeCo WIP (work-in-progress meeting), which is about discussing the week ahead and if there’s any challenges other people have experienced, and lending a helping hand.

“If there’s a serial entrepreneur who’s just exited their business and just hanging around waiting for a new idea, or to be inspired by a new start-up, they could come and work out of here for less than half the price because they have a huge amount of value to add, compared to someone who might be a consultant where they want to kind of work by themselves but is still valuable in terms of their network.”

Hauer says the pricing model will change over time, but is confident it will be successful.

“We’ve had a few people who started here on a higher rate and then, as they’ve been more open to helping other people, we’ve been able to discuss dropping their rate,” he says.

“The whole idea of collaboration is helping others… I think there’s a lot of opportunity to put a really clever structure in place.

“A lot of co-working spaces sing the words, ‘We’re collaborative’… but there’s not that much structure involved.

“I think that’s where a lot of the spaces might fall down in terms of actually maintaining a culture that is explicitly about collaboration and nothing else.”

In the meantime, WeCo has signed up a number of well-known start-ups.

“We’ve just signed on the team from Peazie who are setting up the Sydney part of their successful Facebook brand page tech start-up, aimed at B2B advertising and brand sales,” Hauer says.

“We’re seeing some great collaborations spawn, which is helping new entrants to the start-up scene; Alex and Sophie from Goulburn Health Hub and as well as an orthopaedic surgeon turned medical start-up founder of Europos Medical.”

Jayson Hornibrook, managing director of Peazie, says the company was intrigued by the WeCo model.

“We were very excited about contributing and working with like-minded individuals, collaborating and executing. It’s an everyone wins model, especially for start-ups,” he says.