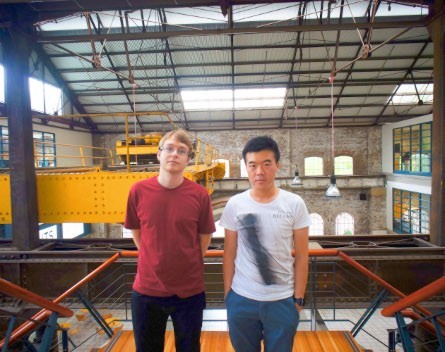 Email auto-completing software start-up Composure is two months old, a couple of weeks into the Startmate accelerator and miles ahead of their original planning.

Co-founders Mitchell Quille and Dan Tse, who have known each other for 10 years, came up with the idea after catching up with a friend who worked in the law industry.

“He was explaining how much time he lost every day sending the same emails to so many people. We decided there had to be a better way to do email. It may never be fun, but we can make it feel less like pulling teeth,” Tse told StartupSmart.

The software reviews the phrases you’re entering into a new email, explores your sent and saved emails and produces copy based on emails with similar phrases and contexts.

Startmate focuses on technical founders. Tse says they’re learning a lot about how to use their technical background to develop their sales and team leadership skills.

“One of the strengths of Startmate is that they believe firmly in technical co-founders. And we’ve got two, so we’ve got the technology covered and no concerns about getting the software working. But we’re learning a lot about how to be effective salespeople, how to be good CEOs, and how to use what we know about being technical founders to inform how we sell things and how we market,” he says.

Tse says the biggest challenge they’ll face in the next six months will be acquiring customers. They’re studying the sales strategies of other productivity apps and have decided to focus on developing a freemium subscription model.

“This model lets individual employees install it themselves, and then it spreads from the bottom up. Once it starts doing that, we can go to the company and pitch the paid version around the idea of extending the benefits of Composure to the entire organisation as this has worked well for productivity suites and apps,” Tse says.

The growth journey for Composure has been discussed since day one of their Startmate journey. After sitting through five hours of non-stop “mentor roulette” interviews, a recurring question was why they have only focused on Outlook and not Gmail at this point.

“We had to give the same pitch about our product 20 times, and be very enthusiastic each time. It was extremely tiring,” Tse says. “We kept getting asked about Gmail, but our research bore out our target market of professionals still mostly used Outlook.”

Tse says they will be looking to expand the software beyond just Outlook, and the legal and tech professions in the coming months.

In order to do so, Tse says they’ll need to raise funds to bring on more target industry experts to understand the key email challenges, as well as dedicated marketing people.

During the investor tour to San Francisco in the last two months of the program, Tse and Quille will be aiming to raise $1 million in seed funding.

The software will be available in an open beta from next week.

“We demoed it to some CISCO employees yesterday and it’s pretty amazing to see it actually working and potential customers engaging with it,” Tse says.