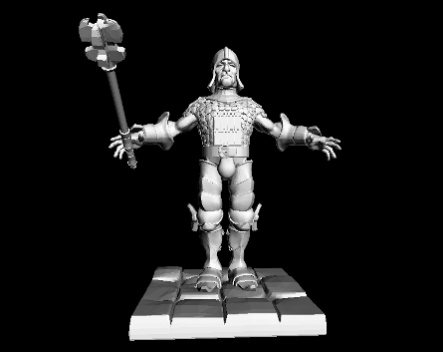 Melbourne startup Creo Ludio wants to unlock the potential of 3D printing by offering a tool for users to easily design all sorts of customisable objects, starting with Dungeons & Dragons characters.

The startup has developed a web based app that allows its users to create a product that can be printed in 3D. For the time being, Creo Ludio is concentrating solely on Dungeons & Dragons, giving players the ability to customise and create their own characters, using a base model and various customisation options.

“There’s no point making a mass produced article in a custom technique,” he says.

“It has to be custom designed in order to get the maximum value out of it. The question is how do you simplify that and at what point is custom still custom.”

The startup utilises WebGL which gives users the ability to access 3D graphics in a web browser, technology which co-founder Chris Bartlett says is underutilised.

“I was really intrigued by the idea of building something like this for the web, because of the potential for accessibility,” say Bartlett.

“(WebGL) is this really understated technology that not many people have really specialised in.”

The startup is currently in beta, with plans to launch at PAX Australia in late October. So far it’s sold four units, with another 60 “on the books”.

Currently Creo Ludio doesn’t allow its customers to print their objects themselves, but as 3D printers become more prevalent in the future, they say this will likely change.

The team is aware of at least one other Dungeons & Dragons character builder startup, but they aren’t concerned about competition.

“That’s not our product, our product is something that allows you to design a product for 3D printing, Dungeons and Dragons is the first instance, but there’ll be a whole bunch after that,” Ebeling says.

“It might be sunglasses, it might be earphones that customise to that shape of your ear, it could be anything.”

The Creo Ludio team has been bootstrapping the startup, and while they’re not actively seeking investment, they say that it could change by the end of the year.