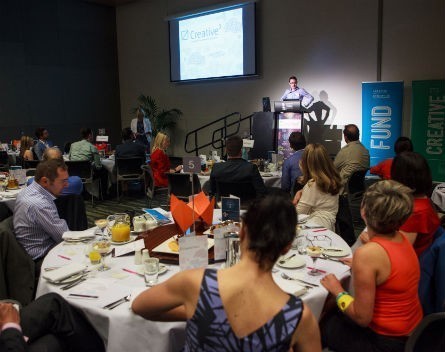 Four creative startups have been selected to vie for the chance to represent Australia at a global event for creative entrepreneurs.

The Creative3 Pitch finalists will compete at an event in September to decide which one will be flown to Denmark to participate in the Creative Business Cup, where they will pitch to some of the biggest venture capitalists in Europe and battle it out for a prize pool of more than US$35,000.

QUT Creative Enterprise Australia is presenting the local competition, and CEO Anna Rooke says it has attracted the largest number of applicants they’ve received since it began six years ago, with over 60 startups in the race.

“We’re really pleased with the level and quality we’ve seen coming through. Compared to when we started the quality, technology, diversity and scalability of new ideas really reflects the maturing of the Australian creative technologies ecosystem.”

The finalists include Men on the Moon, developers of an app that helps retailers turn foot traffic into real business, ComiXchat, which turns conversations into comics, BrandSpot, a brand management platform and online art marketplace BlueThumb.

Rooke says they were picked for their global potential and the people behind them.

“We were looking for businesses that had an application or core technology in the creative industries, a clearly defined market execution plan, the ability to scale and grow globally, and the ability to pitch that idea,” she says.

The Creative3 Pitch was launched with the aim of building the capacity of startup founders in the creative industries, and increasing the number of investor-ready businesses.

“We created it to connect some amazing creative technology startups with investors who have an interest and appetite in these types of companies,” Rooke says.

“Often the creative industries in Australia aren’t seen as being in the mainstream,” she says.

“Not all businesses have a core IP portfolio, and that somehow puts them in a higher risk category for investors who haven’t had exposure to this.

“We want to break down some of those barriers, and we’re also putting our money where our mouth is and investing in this sector.”

Past Creative3 Pitch finalists include Handkrafted, Trademark Vision and Project Tripod, who have all received funding following the competition.

In terms of advice for the four finalists, Rooke says it’s all about developing a compact and efficient pitch.

“Practice is the number one thing to do,” she says.

“Keep it really tight and clearly articulate your value proposition and the amazing team that can deliver.”