Drone startup is ready to test the waters 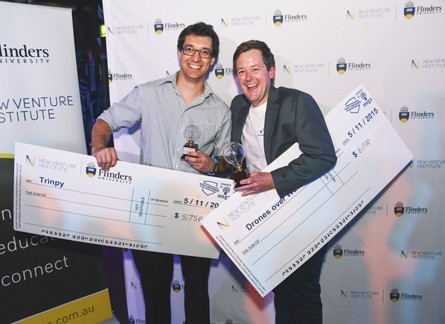 While working in the mining and oil industry, Adelaide entrepreneur Dan Squire regularly saw the innovative use of drones to solve long-standing issues.

But when he moved into the water industry, he was surprised the same wasn’t being done there.

It was that realisation which led him to create his startup, Drones over Water, which utilises unmanned autonomous vehicles to monitor water quality in remote locations.

The concept was recently recognised at the Flinders University New Venture Insitute’s eNVIes awards last week, with Squire taking out the top prize.

He has developed a prototype drone fitted with water sensors that can collect samples and records data from water sources in areas difficult for humans to access.

“In the Murray-Darling and places like that, sometimes they can’t test billabongs and lagoons, because it’s quite hard to get out there,” he says.

Squire says the information collected by drones would arm the water industry with crucial information about water quality, like the presence of blue-green algae, and help experts know how to best treat that water.

“At the end of the day, anytime you can get someone off a watercourse, that’s a good thing,” Squire says.

“I’ve spoken with more than 20 CEOs and managers, and almost every one of them has said they think this is something that is useful and a great idea. Those who would use it have said they would take it on.”

Squire now plans to move on from the prototype stage, but admits there are obstacles to be overcome. The sensors for the drone must still be perfected and he also has to appease aeronautical authority regulators.

Regardless, he’s already thinking about other applications for his product.

A sailor by trade, Squire foresees drones being used to test seawater, as well as reducing the risk to ship workers completing dangerous jobs.

“In that world, you’ve got people hanging off the sides of ships,” he says.

“Why can’t you just send a drone to do that? It’ll reduce the risk.”