Experts in the field: How a faulty lift could revolutionise crop forecasts 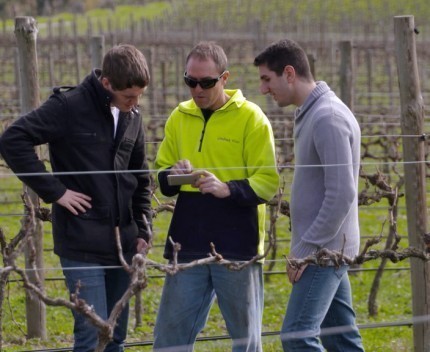 A product that could revolutionise the agriculture industry wouldn’t have existed at all if two young Adelaide University students didn’t get stuck in an elevator together.

In the elevator, Harry Lucas convinced Liam Ellul to join his team and compete in a university business challenge after the pair discussed science fiction and their visions for the future.

Along with co-founder Petros Bakopoulos, they eventually created Seer Insights, a startup which aims to make yield estimates for crops more accurate.

The company’s flagship product GrapeBrain collates all the data relating to crop yields and runs it through a series of predictive analyses to quickly turn out data and discover patterns and insights for future crops.

Inaccurate predictions are a big problem in agriculture, especially with vineyards, Lucas says.

“We’ve got technology that’s able to predict with a much higher degree of accuracy how many crops will be harvested than what’s currently available,” he says.

“It’s a widespread issue and we have a solution for it.”

Predictions for grape productions are usually out by about 30%, Lucas says, and this can have huge financial implications. Seer Insights estimates that this problem could be costing Australia $200 million annually.

The agriculture industry is mostly using very traditional pen and paper methods at the moment to predict their yields, Lucas says, leading to the inaccurate calculations.

GrapeBrain has both cloud and mobile elements to cater to different stakeholders, and the young team is now working on a third prototype while also engaging in a pilot program with a number of vineyards in South Australia.

“The wine industry is the best platform to launch from,” Lucas says.

“It’s so reputable in South Australia, and the industry is crying out for it, it’s really struggling at the moment.”

Lucas says he talked to a vineyard in the state that produces 14,000 tonnes of grapes per year, and the trucks that transport this harvest can only take 22 tonnes at a time.

The startup has received funding from Microsoft’s BizSpark program, and will monetise the service by selling it directly to the agriculture industry.

At the conclusion of the pilot program, Seer Insights will produce a report detailing the results and the accuracy of its predictions.

“The wineries want numbers, not a premise,” Lucas says.

“Once we have that it’s a question of how far and how fast we can spread it.”

The trio behind Seer Insights are all students in their early twenties, and Lucas says their youthfulness is usually an asset.

“It’s really good for practicality, we have no mortgage or families,” he says.

“Some people say you can’t do it just because you’re young though, and you have to be able to deal with that.”

Lucas is studying engineering at Adelaide University, and says it’s a big step to be applying this knowledge outside of his studies.

“I’m applying that in the real world and developing a platform other people will be using a relying on,” he says. “That’s slightly terrifying.”

University students are in a prime position to get involved with startups, Lucas says, and more need to be embracing an entrepreneurial attitude.

“There’s so much space for innovation, especially in South Australia at the moment, and we need to see more people having a crack at it,” he says.

“You have a school full of lawyers, engineers and artists, and nobody has any big obligations. It could be like a boiling pot of innovation, but it’s not happening.

“The main thing that needs to happen is to have students that are willing to have a crack.”

He’s encouraging other university students to follow through with their ideas and to see where that takes them.

“Just do it, you’ve got nothing to lose. The worst case scenario is that you don’t succeed but have this fantastic item on your resume.

“The best case scenario is you build a self-sustaining company and change the world.”