Entrepreneurialism insights from the trenches: Fitzroy Academy of Getting Sh-t Done launches 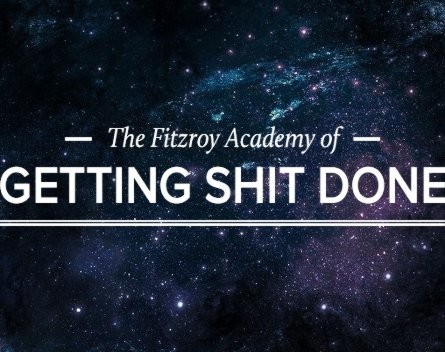 Incubators, accelerators and university courses in entrepreneurialism have flourished across the country in the last 18 months. Another is starting in Melbourne next year, but the founders of the Fitzroy Academy of Getting Sh-t Done are looking to launch a program distinct from the pack.

The Academy of GSD pilot program will launch in January, with 25 people selected on their commitment, motivation and ability to execute on what they’ve learned during and beyond the program.

Co-founder Will Dayble told StartupSmart there were millions of ideas and they’re after great people, both as participants and in the 35-strong team of mentors and experts who will be involved in the course.

The idea for the program was spawned after Dayble taught a program in online products at Melbourne University. This was Dayble’s experience with university education, and he says he was struck by how unsuitable the style of learning was.

A few coffee conversations with his entrepreneurial friends later and the Fitzroy Academy of GSD was born.

“The people who are actually out there getting entrepreneurial shit done actually don’t have time to go teach at uni. I’m a case study in that, and so are most of the other founders. We wanted a course that combined a quick snappy course structure that allowed 30 very intelligent, very busy people to teach about what they do best,” Dayble says.

“Everyone, including corporates, is getting excited about the funny buzzword ‘innovation’. But those who are actually good at it are not so good at sitting around talking about it. We want a course where you get access to these guys.”

Course participants will have three mornings of learning from each of the 25 mentors and five skill vertical experts. Dayble says they’re not interested in information so much as approaches.

“You can get all the info you need online. You can watch Harvard University lectures at home in your underwear, so why would we make entrepreneurs disseminate information when they can show you how passion works and how you actually solve problems?”

They’re planning a crowdfunding campaign in January to fund some of the infrastructure costs, and will be exploring corporate partnerships to create scholarships to ensure a wide range of participants.

They will also be running a series of broader community events, with the first on December 16 being the key recruitment opportunity for future founders keen to join the program.