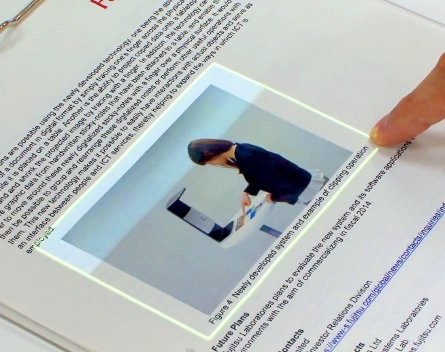 New imaging technology turns any paper document into an interactive touchscreen, with a projection and camera system developed by Fujitsu.

Users instantly copy text and photos by using a finger to draw a box around them. Digital copies can then be moved, edited and manipulated is if they were on a tablet.

Fujitsu hopes to release a commercial version next year.

The system projects virtual buttons onto the tabletop, which people can press to start copying or to perform other actions.

The projector also illuminates the sections people want to highlight and projects copies of the text or image they want to grab.

Virtual copies of items can be “stored” to one side and then moved around or manipulated.

Fujitsu believes the system will replace the keyboard and mouse. If that’s the case, what other add-on items might be needed?