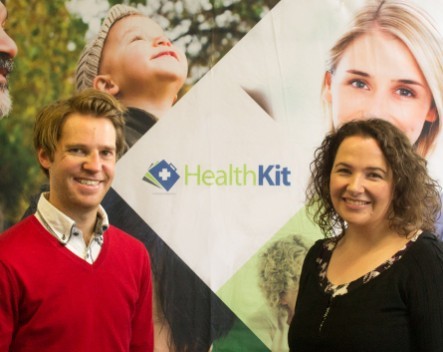 The co-founder of Melbourne-based startup HealthKit, Alison Hardacre, was surprised and confused to learn Apple is using its name for one of iOS 8’s features.

Even the capital K.

In the early hours of Tuesday morning, Hardacre woke to the startling news.

. @HealthKit was around a long time before iOS 8… #justsaying

“I just happened to wake up at 4.15am and couldn’t get back to sleep, so like any good tech entrepreneur I decided I’d check my emails on my iPhone,’’ Hardacre says.

“I found an email from a friend asking, ‘Has Apple just trampled on your name?’”

Surprised, she jumped out of bed and checked for herself and found numerous reports about HealthKit, Apple’s new native health tracking platform.

Apple’s HealthKit is designed to help users keep track of all their health and fitness data, effectively collating health data from the many health apps available by allowing them to share data.

The Melbourne-based HealthKit is a global health administration platform which enables patients to find practitioners online and enables users to track, manage and share their health records.

“Every startup worries that Google, Apple or Facebook will enter their market, but nobody thinks they’ll take their name when they do it,’’ Hardacre says.

@healthystartups @HealthKit The new cyber squatting. The big don’t have to care! #notfairapple

Following the announcement her company’s name was the fifth most popular trending term on Twitter yesterday and traffic on its website www.healthkit.com, which it has owned since 2012, was 10 times more than usual, according to Google Analytics.

“We’ve been growing at a rate of 7% a week, which is really a fantastic rate of growth, it’s what the founders of Airbnb say you should be aiming for,’’ Hardacre says.

“We’ve been over in San Francisco at health tech conferences; we’re not like some company hidden in some backwater. We’ve grown and we’ve followed a particular strategy, we’ve looked at moving the company to Silicon Valley.

“Part of me thinks it’s the cut and thrust of the business, but it’s actually not.

“It made me realise that this could happen to every startup.

“I kind of felt a little bit let down – didn’t they spend five seconds to visit HealthKit.com?”

Hardacre says HealthKit had already filed a trademark for HealthKit in Australia.

StartupSmart contacted Apple for comment, but has yet to receive a response.

@tim_cook @HealthKit I know you’re new to this whole Ruthless-Like-Steve-Jobs game, but my good man, you need to learn subtlety!

Executive director of Premier IP Ventures and intellectual property expert Brian Goldberg says the incident serves as a warning to startups to ensure they register their brand name as a trademark.

Goldberg says it’s not conclusive at this stage that the brand HealthKit is entirely owned by the Australian startup, nor whether or not Apple will use it as a standalone brand name or in conjunction with its core Apple brand.

“So at this stage the Australian startup may have some brand rights in Australia but it’s not definitive as to the extent,’’ he says.

“It is important to file your brand as a trademark. This provides certainty and clear rights for the brand owner. Importantly the rights can then be enforced as well as negotiated.”

Note: this story has been updated for clarification.