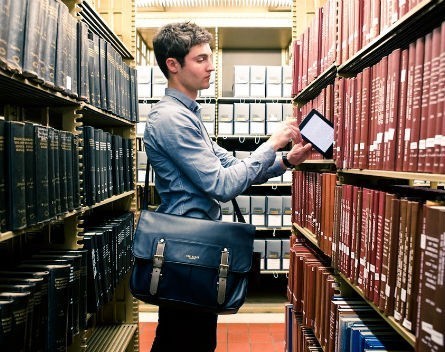 Startups, like genius, are 1% inspiration and 99% perspiration. Successful startups execute. But executing drains your energy, so it’s important to go back to the well of inspiration somewhat regularly, to make sure you’re up to the task.

With that in mind, we’re taking a break from the ‘how to’ of getting your startup off the ground, to tell you the story of a young entrepreneur called Ash Davies, and his journey into entrepreneurship.

Davies is the founder of Tablo.io, a self-publishing platform that is often likened to ‘YouTube for books’. Tablo went through AngelCube in 2013, having since gone on to raise further funding to realise their vision to create the future of publishing. And whilst this may sound a million miles away from where you are with your idea right now, you’ll note that his story was borne from solving his own problem, a familiar theme and great way to end up working on something you’re genuinely passionate about.

Below is the transcript of our conversation.

AN: Hi Ash, thanks for taking the time! First things first, what were you doing before Tablo?

AD: Prior to Tablo I was writing and pursuing a career as an automotive journalist. I was fresh out of high school and studying journalism at university. I was self-employed, running a photography blog and selling my photography book.

AN: Impressive. Sounds like you were already self-sufficient in terms of making a living off your own projects. Is that what made you want to do a startup?

AD: Truthfully I didn’t mean to start a startup. I didn’t know that startups existed until I was a few months into my idea and colleagues began introducing me to accelerators like AngelCube. I started Tablo because I was struggling to publish my own book and knew there could be a better way.

AN: So it would be fair to say this startup had its roots in a problem you had experienced first-hand?

AD: Yes. I came up with Tablo in a rather natural way. I was struggling to publish my own book. As a blogger I was so used to being able to write something, click a publish button and connect with my readers. Publishing my e-book was an awful lot more complicated. It took me six months to go from a finished book to e-bookstores and when I launched no one was there to read it. I knew there had to be a better way, so Tablo was born as a sort of ‘YouTube for Books’. It’s a platform where you can create, publish, read and discover new books.

AN: And when did you know this was the one?

AD: There was no lightbulb moment. During my second year at university, Tablo was the only thing I really wanted to be working on. I took the leap to drop out and focus on the idea full-time. Getting into AngelCube was further validation that this idea had potential.

AN: Cool. What would you say has been the hardest part of the journey so far?

AD: The learning curve. Building an early stage company isn’t something you can learn how to do from articles or mentor sessions. You can only learn by working hard and effing up occasionally. In September of 2013 we had a spike in growth, I was running out of money and my lead developer quit. That kind of sucked. My incompetence bit me, but the experience taught me how to better manage people and money. I can’t describe how much better off the company and I are for having gone through a few near death experience.”

AN: Sounds like it’s been a school of hard knocks…biggest surprise along the way?

AD: The people and companies we’ve attracted attention from is kind of crazy. I spend a fair bit of time working with people that I used to read about, from Silicon Valley investors to major corps. Every now and then I have to remind myself that this kind of work is not normal for a 21-year-old. Going through a program like AngelCube helps, you learn from the mentors and startups alongside you, which keep unpleasant surprises to a minimum.

AN: You’ve certainly put my 21-year-old self to shame that’s for sure! You mentioned the learning curve being the most difficult part of doing a startup, what’s been the biggest take-away from that learning?

AD: Focus on your product, focus on your users and everything else will come naturally. I made the mistake early on of thinking that building an early stage company was all raising funding, building pitch decks and having partnership meetings. I now know that funding and partnerships are by-products of having built something people really want to use. In an early stage you need to focus on making your users the most interesting people at the dinner table. Be relentlessly focused on your product and, if people love it, funding and partnership opportunities will then start coming to you. It’s easy advice to hear, but it’s incredibly hard to understand what it actually means for your company.

AN: Great! And just lastly, have you any advice for those reading along at home wondering if they should get into startups?

AD: Generally, don’t. Building a startup is the hardest thing you’ll ever do and I wouldn’t advise anyone to start a startup because they’re interested in the startup scene. The best ideas are organic, and the most successful founders are the ones who are so obsessed by an idea that they can’t avoid making it a reality. Don’t start a startup because you like startups. Instead, start one by accident”.

AN: Haha, nice! Once again Ash, thank you for taking the time and best of luck with Tablo.io in the future!

This is the part three of our #2015istheyear series.

Part one – The year for my idea.