How shopping around for an idea led to carwash startup 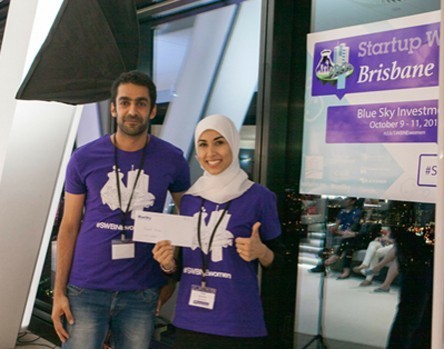 When Areej Alsheikh wants to do market research, she goes shopping.

Armed with a notepad and pen, the Brisbane entrepreneur wanders her local mall, approaching shoppers to ask whether they’d use her newest startup idea.

It was on one such fact-finding mission Alsheikh conceived airSponge, a carwash crowdsourcing platform that won her the inaugural Brisbane Women Startup Weekend last month.

But airSponge wasn’t her first idea that day. She originally asked punters about a mobile beauty service.

“Then I remembered a friend of mine, a mum, complaining about her dirty car and how she would love to have someone wash it for her.”

Just four weeks after launching, more than 100 people have registered with airSponge to wash cars across Queensland, New South Wales and Victoria.

She says the startup’s primary appeal is its convenience.

Car owners register on the airSponge website to find a local who, armed with soap and sponge, will come to their home or workplace and wash their vehicle. Alsheik says the service frees people to spend their time in other ways.

“A mum with several kids doesn’t have time to wash her car and a busy person wants to spend their weekend with friends,” she says.

“Washing the car is last thing on their mind.”

She also says an airSponge carwash is much cheaper than you’d pay at for a similar service at petrol stations or shopping centre car parks.

A four-wheel drive wash organised via her website will set you back approximately $50, a job Alsheikh says would cost as much as $100 otherwise.

And just as Uber drivers might provide their passengers with free water or mints, Alsheikh says there’s room for car wash providers to leave a little something extra, like air fresheners.

Hopes for the future

Alsheikh now hopes to win more support for her startup through ilab’s Germinate program, for which the company has been shortlisted.

She’s thankful for initiatives like the Brisbane Women weekend that are prepared to support female entrepreneurs.

“I have been to similar events before and they were always dominated by men,” she says.

“Having events specific for women not only encourages more and more women to participate, but also makes such events so much less intimidating.”