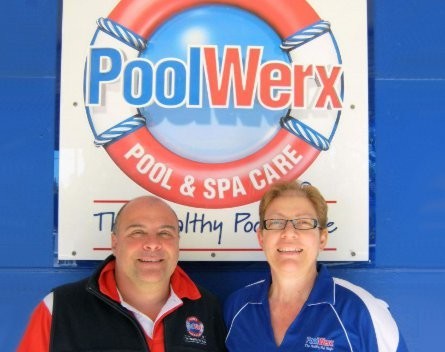 The winter season can be tough on sales, but having a year-long perspective and diversifying your revenue streams can help you survive the slower cashflow months.

Caroline and Paul Attard own four franchise territories with Poolwerx, a swimming pool products and services franchise. They took out the award for multi-unit franchisee at the Franchise Council of Australia Queensland annual awards this week.

Paul Attard told StartupSmart the key to making it through winter was developing a longer-term outlook and being smart about when and where their money comes from.

“We’ve had a pretty good plan of what we need and where we want to go, and we’ve stuck to that,” Attard says. “The summer season could start in September and go all the way to Easter. It is flat-stick and all hands on the pump, and then it slows off very, very considerably from Easter onwards.”

They own one store and service four franchise territories. Developing a strong mobile business was a priority for the Attards when they bought their first franchise in 2005.

“The shops are very quiet, but we’ve built up a very strong network of six mobile technicians to combat that, and that’s when they start to take their holidays,” Attard says, adding the quieter winter months is also when most of the team take their holidays.

They also built up a network of customers who use their pools all year round to guarantee revenue during the colder months.

“We’ve developed a large commercial side of the business. The guys have to run 12 months of the year. So home users quieten off significantly, but the commercial partnerships keep us going and keeps our cashflow healthy,” Attard says.

“You are able to really look at your core and where you can have other revenue streams to flow into the business in those quieter times and work those,” Attard says.

“We use all the tools in the franchise system and that has helped us significantly. You’ve got to get in and do the work. The franchisor is there to help, but he’s not there to run it for you. From the very outset you need to know it’s yours and run it that way.”

Craig Russell from Clark Rubber was announced Field Manager of the Year, and Sarah Cobb won Franchise Woman of the Year for Cariblue franchise. Elton Berrange took out the award for Franchisee Community Service for Grill’d.