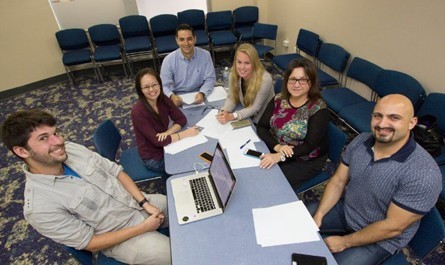 Inspired by the global Techfugees movement — the tech and startup community’s response to the refugee crisis in Europe, co-founder of muru-D Annie Parker knows how to rally the right people and mobilise extraordinary support.

She reached out to the goddess of tech and startups, Nicole Williamson, plus myself. We jumped on board without hesitation.

Then there was an extraordinary response from the startup community, with the likes of Phil Morle, Alan Jones, Mon Wulff, Shelli Trung and Michael Ascharsobi getting involved.

It all came to fruition on the weekend.

It is astounding what happens when you throw a bunch of unrelated people together and give them a limited amount of time to produce a result. It’s even more amazing when you support them with some of the top tech and startup mentors in the industry.

The organising team was small but fierce. I think it’s important to highlight the diverse skills and experience necessary to pull off a social hack and we had the best in every field.

The spirit of collaboration kicked in from day one, despite the fact that the majority of teams had never met before, the energy was magical. There is this extraordinary alchemy that happens at hackathons. People that are drawn to them have shared values or they wouldn’t bother to give up their weekend to spend it with a bunch of strangers.

Hackers are committed to outcomes and they are the most generous and kind-hearted people I have ever met.

Differences are a strength and I have yet to attend a hack without great diversity in skills, culture and religion.

The alchemy of TechFugees Australia was in the social design.

We embedded beneficiary co-design and funding product development in the package of the hack. We framed the hack around six themes identified by the NGOs and had former refugees pitch their story and the teams formed around solving the refugee problems.

The former refugees collaborated with entrepreneurs, designers and techs over the weekend to co-design solutions and the results were astounding submissions which can be found on DevPost.

The TechFugees Australia spirit is the sum of every single person who participated, mentored, organised, cheered on from the sidelines, wrote articles and blogs and who followed our journey on Twitter and Facebook. It is also the sum of our sponsors and partners who took a leap of faith in our social design method.

I know the SSI and STTARTS staff, clients and former refugees felt energised and renewed hope that there is a better way to design and solve problems through tech and startup and ultimately make it easier for refugees to settle in their new country.

Anne-Marie Elias is a speaker and consultant in innovation and disruption for social change. She is an honorary Associate of the Centre for Local Government at UTS. You can follow her on Twitter.