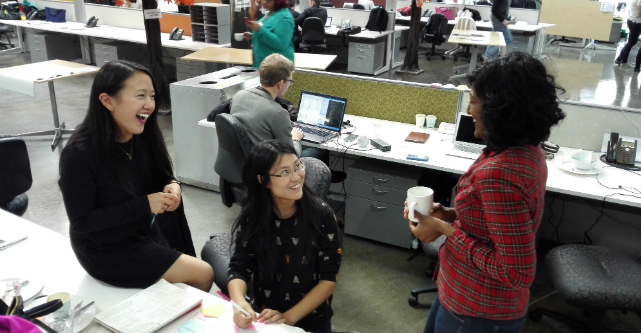 I’m obsessed with numbers – perhaps a side effect of being an investor for the last 10 years.

For me, numbers tell a story – whether you’re on track, or need to course correct.

Here are the numbers that mattered to me from the recent Techfugees Melbourne Hackathon that I helped organise:

Those of us who have been to enough tech events know us women are scarce on the ground. Hackathons typically tend to be the worst offenders, where having 20% of attendees be women is considered a good mix of diversity.

Similarly, our partnerships with the Australian Red Cross and AMES Australia contributed significantly to our messaging but this alone can not account for double the number of women when you compare it to other gender neutral events such as pitch nights.

How did we achieve these remarkable diversity numbers, not just for a tech event, but a hackathon? Was it conscious effort or luck?

My answer would be that you make your own luck.

As one of the organisers of the event, I know there were conscious efforts made early on to ensure we didn’t just talk about being diverse, but also delivered on that promise.

Here are some of the steps you too can take to maximise your diversity quota:

1. Start with the organising team

We began with a core organising team of seven. None of us knew each other before independently volunteering to bring Techfugees to Melbourne. The diversity in the organising team was pure luck.

I’ve seen diversity on my startup teams work brilliantly to manage customer risk. It was a real eye-opener for me to see our organising team show on a daily basis how diversity reflected in our skills, experience and importantly, the networks each of us brought to the event across government, non-profits, tech and investors.

As our theme was ‘codesign’ – bringing together the social and tech community – we didn’t just reach out the tech community. We wanted to also tap into the tech talent already within some of these social organisations or had an interest in these community issues.

How did we do this? We simply asked our supporter organisations to share the hackathon on social media. A lot of startups and tech events miss this – they don’t think about complementary organisations that will likely have a more diverse audience.

For any of the tech community outreaches, we targeted the women groups first. This will typically mean the message within these groups get a head start for circulation and therefore sign ups. One of the best women tech groups is Girls Geek Dinners lead by Hima TK.

While we fell slightly short of women mentors (five out of 15) due to some last minute cancellations, we confirmed the women on our judges panel first and put their bios up on our DevPost page.

According to a recent New York Times article, when women are visible in leadership positions at an event, it encourages more women to take active roles during the event.

As we had a lot of attendees who were new to hackathons, the organisers went above and beyond to ensure we responded to enquiries promptly – many of which asked how a hackathon works.

Early on, we released an infographic about the success of recent Techfugees Sydney hackathon to give a snapshot to attendees – this was done strategically to make the event more digestible.

In the last month, we sent weekly newsletters with helpful tips and ran webinars to help attendees understand how hackathons worked. We ensured all communication was gender neutral and avoided specifics such as “wear sneakers” (males wear these more often) and instead opted for “wear comfy shoes”.

Lastly, but perhaps one of the most important part about running any tech event; we didn’t just serve beer and pizza. Don’t get me wrong, I like my beer and pizza as well as the next guy but if you looked up women events, they will rarely serve just beer and pizza on the menu.

Thank you to all those who helped make the Techfugees Melbourne Hackathon possible including our sponsors LaunchPad, Telstra Foundation, Stripe, Amazon Web Services, LawPath, General Assembly and InnovAction for believing in supporting diversity in Australia.

Most importantly, thank you to all the attendees for making this a safe and supportive environment for women and our multicultural community to shine.

I have never stepped into a female bathroom that needed cleaning and been so incredibly happy knowing it was being used.