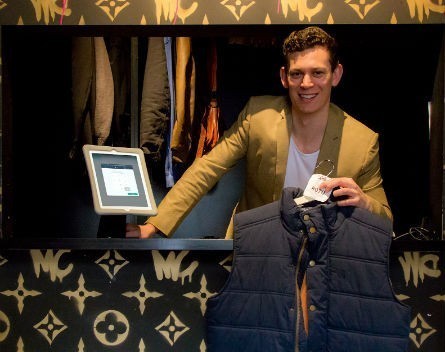 Dominic Goldsworthy was sitting at the local pub, working on his laptop, when he came up with an idea.

The venue didn’t have its own cloakroom, and he saw the chance to make a few extra bucks.

With the help of a simple Excel spreadsheet, Goldsworthy and his friends ran their own digitised cloakroom for two months, and after receiving positive feedback from the owner, decided to turn it into a business.

Cloakr launched in January last year and is now used in over 20 venues, and has just reached a big milestone: 100,000 items have been cloaked through his platform.

From raffle tickets to an iPad

It’s a big step-up for most cloakrooms in the country, which still seem to operate in the old-fashioned way.

“They run pretty much with raffle tickets, it’s all pretty mundane and difficult,” Goldsworthy says.

The Cloakr system is based around two products: an iPad and a receipt printer. Patrons simply enter their contact details into the iPad, and then say how many items they want to cloak. The ticket is then printed wirelessly and taken by the user.

It’s a service that provides real benefits for the venues, he says.

“They love it,” Goldsworthy says. “They really enjoy the benefits it adds, like more security with the online record, and the information it provides about customers.”

Using Cloakr, customers can enter their email and phone number, and chose to opt-in to receive the venue’s marketing.

The software as a service startup operates on a subscription model, which has been upgraded from a “crude” one-size-fits-all approach to a new three-tiered system for different sized venues.

Goldsworthy says they’re recruiting about one new venue a month, with it currently mainly being used by nightclubs including The Bottom End, Ivy, Inflation and Tramp.

A young entrepreneur in the US runs a very similar startup called CoatChex. The service operates as a free-standing kiosk where clothing is checked which can be assembled quickly.

On the hunt for funding

Cloakr has been entirely bootstrapped by Goldsworthy so far, although he’s looking to open a funding round later this year.

“Now we’re in the midst of starting a funding conversation,” he says. “There are already some interested parties.”

“It’s my first time doing it, so there’s a lot to learn about the process.”

Goldsworthy is also looking to expand the app outside of Melbourne at some point this year.

“We still haven’t hit the Sydney and Brisbane markets yet,” he says. “There are still a few big venues we want to get on board in Melbourne before we think about stepping into Sydney.”

While this is all going on, Goldsworthy is also juggling his studies at Swinburne University, something which he says is “near impossible” at times.

“I’m weighing up whether to defer,” he says.

“I want to do Cloakr when it’s doing well, and when it’s not I want to go to uni”