Infographic holds clues to why so many start-ups fail 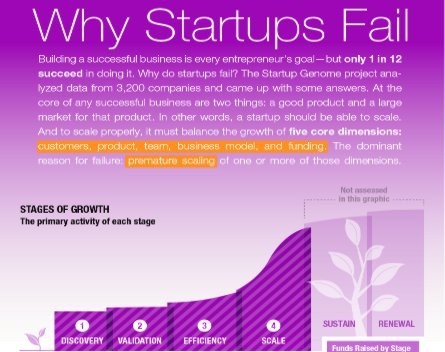 Why start-ups fail is the question behind a new infographic released on Visual.ly by the Startup Genome project.

The Startup Genome project is a crowd-sourced data gathering initiative for start-up operators. So far, 280 curators have organised data on over 80,000 start-ups in over 5500 cities.

The Startup Genome team have used this data to create an infographic based on the findings of how 3200 of them have grown, survived or failed.

The project focuses on the four early stages of start-ups: discovery (identifying a product and honing a solution), validation (testing markets and locating potential customers), efficiency (developing business systems and staff) and scale (the big push for customers).

The consistent companies (the more sustainable ones) also outsourced less and raised less money in their early stages.

The project found inconsistent companies focus too much on scalability and on building “nice-to-have” features, and not enough time on user testing.

The findings also include team size and growth patterns. While inconsistent start-ups attracted and enjoyed 10 to 12 times the user growth in the very early stages, the slow growth of consistent companies pulled ahead at the efficiency stage (seven to eight times more users) and ended up attracting 16 to 26 times more users after scaling.

You can see the full findings in the infographic here.