Innovation at the heart of tackling the growing threat of economic inequality: Shadow treasurer Chris Bowen 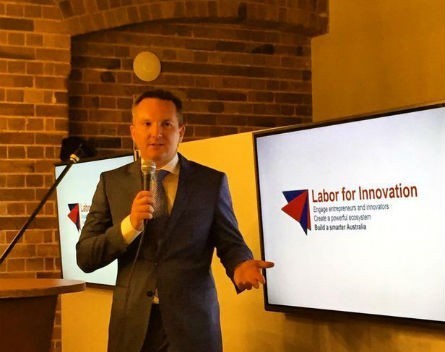 Australia needs to spark a new age of entrepreneurialism or risk a rise in economic inequality, according to shadow treasurer Chris Bowen.

Speaking at Blue Chilli’s Sydney headquarters on Wednesday night, on the topic of Labor for Innovation, Bowen said entrepreneurialism and innovation needs to be at the heart of Australian economic policy.

Bowen says the rapid advancement of technology has given rise to two problems, one unique and one familiar to advanced economies around the world.

“Firstly: the unique one. Australia’s GDP growth has already been impacted by a full percentage point, just since 2012, by the end of the construction of many large mining projects. And the decline in mining construction will continue in rapid fashion over the next couple of years,” he says.

“And we know that mining operations are a lot less labour intensive than mining production. LNG facilities, which took more than 35,000 people to build, will be operated with just 4400 employees. We need to generate job creating investment in the non-mining sector to help the economy during and beyond this transition.

“The second challenge is one less well understood but not unique to Australia. It is the risk of jobless economic growth and the threat of an unprecedented disconnect between productivity growth and employment growth.”

Bowen says that disconnect is being driven by a remarkable acceleration in the development of new technology over the last few years. As a consequence entry level and manual jobs are being replaced, not just in manufacturing, but in the service industries as well.

“The elimination of manual and entry level jobs is one of the big drivers of growing income inequality around the developed world,” Bowen says.

“More and more people are competing for fewer jobs that do not require a high degree of training. The rapid rise of technology is a good thing. It makes our economy more efficient, leads to better health and better lifestyles. But we need to work so much harder at innovation and economic policies as a result.”

Bowen quoted American economist Nouriel Roubini who said software innovation, together with 3D printing technologies, will open the door to those who are educated enough to participate, but for everyone else it might feel like the revolution is happening elsewhere.

Labor plans to tackle those problems by paying “greater than ever” attention to education in terms of science, maths and innovation policy. What exactly that might involve Bowen didn’t make clear. Startup advocates have been arguing for some time in favour of policies which encourage increased participation in science, technology, mathematics and computer science disciplines  and push students and graduates towards entrepreneurialism.

The latest StartupAUS Crossroads report, released earlier this week, said the Australian education system “does not adequately equip young people to start businesses, particularly high growth startups”. It advocated for the implementation of a national program of entrepreneurship education for students beginning in grade six and continuing right through into university. It also suggested establishing a network of student startup incubators and expanding the digital technologies curriculum.

What Bowen did outline was an intention to, should Labor win government, introduce an Entrepreneurs Visa, finalise the development of an equity crowdfunding framework, and set up a formal mechanism for which the entrepreneurial sector could advise the Treasurer on key issues. Labor shadow parliamentary secretary to the shadow treasurer, Ed Husic, who joined Bowen at BlueChilli on Wednesday night, has been consulting widely with the startup industry over the last few months.

“As a political party which believes in economic growth as the driver of poverty alleviation and the improvement of the livelihoods of Australians, Labor should be and is embracing the entrepreneurial spirit,” Bowen says.

Economist and CEO of Lateral Economics, Nicholas Gruen, says for too long innovation policy has been weighed down with the old ‘picking winners’ debate.

“Government spends billions on health and education but how receptive are those sectors to new technology, or even new approaches to their core business – they’re pretty dreadful,” he says.

“I’ve suggested a joint venture between a consumer genomics company like 23andMe, or an Australian equivalent, in which Medicare would offer to bulk bill the service in return for patient genomes. The health system could use patient genomes to improve diagnosis, pharmacovigilance and population-based screening for breast and bowel cancer – whilst building a fabulous genomic database to drive personalised medicine.

“That’s just one example. With governments and business each doing their job better, there would be huge gains, without simply picking companies on the basis of their putative innovativeness and slipping them government cash. As chair of Innovation Australia, I promoted a whole suite of initiatives like the one above to promote innovation whilst lowering government costs in the long run. But it was largely ignored for falling outside the usual politics of industry policy in which one picks a side to fight on – for or against ‘picking winners’.”

A spokesperson for Treasurer Joe Hockey said the government was acutely aware of the challenges facing the economy that Bowen outlined.

“We will have more to say in the budget in regards to small business and particularly startups,” the spokesperson said.

Of course a small business is not the same thing as a startup. Next month’s budget will provide a clearer picture as to how seriously the government is taking innovation policy, and the role it sees startups playing in Australia’s economy moving forward.