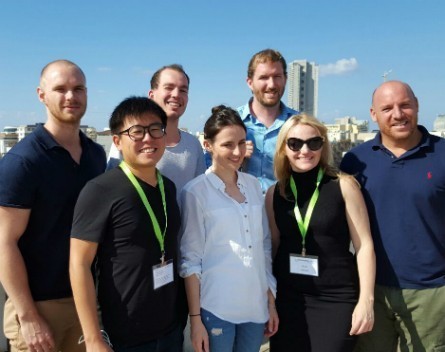 Four young Australian entrepreneurs have returned from a trip to Israel with a shared mission: to make the ecosystem back home work as a team.

The Aussie delegates say the biggest lesson from the trip was the need to work co-operatively as a national ecosystem and show off our success stories.

“We’re cynical about someone doing well – we’ve got to change that and support our own.

“We need to work as an ecosystem team.

“In Israel the ecosystem works well as a team – everyone is supporting each other. From a global perspective, when you go into Israel all the teams are talking about how awesome Israel is.”

Working as a team

Cardew is now based in Silicon Valley, and says she saw a marked difference in how the community works together in Israel.

“A lot of the time in Silicon Valley they are talking about themselves and how good they are,” Cardew tells StartupSmart.

“In Israel they all talk about how good they are as a team and the startup scene as a whole.

“In Australia we are great and we need to talk about that.”

The four young Australians on the trip made a pledge to encourage other local founders to get on board with the team effort.

“All of us were standing around going, ‘we have to gee each other up’,” Fund says.

“We have to work together.

“At the beginning of every person’s pitch-deck over there were a couple of slides that said why Israel is great for startups. The same thing should be happening here – we should be saying Australia is a good place to invest.”

Cardew adds that it’s a matter of moving past the classic Australian humbleness.

“They all gee each other up there. I’m not sure we do enough of that, we’re very modest,” she says.

“If we all do that and we’re all on the same page about how awesome Australian founders really are, we could get a lot more foreign investments and talent.

“We all got so passionate about really helping each other and getting this message together so that we can help Australian startups.”

“What we really need to do is promote ourselves,” he says.

“I genuinely believe that we’re too modest.

“Not a lot of people know that Australia invented Wi-Fi. We have companies like Canva, Atlassian and BigCommerce that are huge on a global basis, but I don’t think as Australia we’re doing enough to promote each other. We need to be more supportive.”

Cardew relocated to Silicon Valley with Pixc, but says with recent action on innovation and the burgeoning startup scene; she’s considering re-establishing a presence back home.

“I’m really considering building out my team here and not just being in San Francisco,” she says.

“It’s a fantastic lifestyle, there are people that work hard and they don’t have egos.

“At the end of the day, Australia is my home.  I would like the equivalent of Silicon Valley to be here, and that’s about getting enough people who do have the money to believe in entrepreneurs and what we’re doing.

“What we do as startups is quite crazy.”

In order to achieve a better ecosystem, she says Australia needs to start with its next generation of entrepreneurs and founders.

“I’m really passionate about going into schools and telling them coding should be taught as a language,” Cardew says.

“We weren’t taught about innovation and tech in school, it wasn’t an option.

“That’s what they’re doing in Israel, they’re teaching entrepreneurialism to kids who are nine and getting them to code and build websites. This should be the norm.”