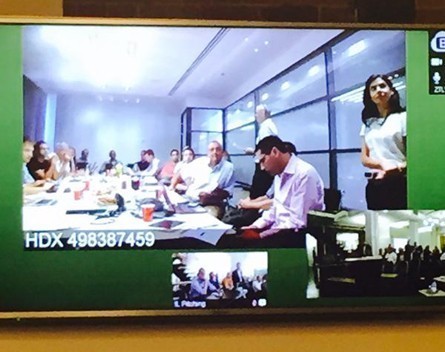 In an Australian first, ten Israeli startups have pitched to a room of invite-only Australian investors more than 12,000km away and provided some useful lessons for local entrepreneurs.

The event on Wednesday night in Sydney was put on by the Israel-Australia Startup Pitch Series and hosted by startup accelerator and incubator BlueChilli, and saw the startups pitch to local investors via a video link.

Director of global growth at ATP Innovations Eitan Bienstock, who co-founded the Israel-Australia Startup Pitch Series with Jono Hermann, Andrey Shirben and Amir Engler, says it was about fostering further communication between the two startup ecosystems.

“The purpose was to expose the Israeli startups to Australian investors and vice versa,” Bienstock says.

“The idea is to help the Australian ecosystem by increasing collaboration, sharing and openness with successful ecosystems around the world.”

A pitch night from across the world

Startups pitching on the night included a hybrid security provider for enterprise, branded smartphone games for marketing without coding and bio-active bone grafts made from coral.

The eventual winner was online education game CodeMonkey, chosen by a popular vote.

Australia head at LanzaTech Nicole Williamson was at the event and says it was less of a competition and more about creating a mutually beneficial relationship between the two country’s startup communities.

“We’re working at bridging that gap between tech companies in Israel and Australia. It goes both ways,” Williamson says.

“The content was absolutely sensational. The breadth of ideas was outstanding, the teams were incredibly talented and many already had high traction and significant money.”

BlueChilli founder and chief executive Sebastien Eckersley-Maslin says exposing the Israeli scene to Australian investors and entrepreneurs can only be a positive thing.

“We want to keep building the ties,” Eckersley-Maslin says.

“They have an amazing ecosystem – it’s one of the biggest in the world. We want to keep promoting and showcasing that to help us achieve our vision and dreams.”

the rise of the Israeli startup scene

According to a Compass report, Tel Aviv is the fifth biggest startup ecosystem in the world. With a population of just eight million, Israel has produced over 6000 startups and attracts more venture capital per capita than any other nation in the world.

There’s a lot to be learned for Australian startups in Israel’s growth, Eckersley-Maslin says.

“There’s a lot of support from the community, government and media for Israeli startups, and that’s something as a broader ecosystem we need to be doing more of,” he says.

He says Israel’s size means startup founders inherently have to focus globally, and this is something Aussies should be doing as well.

“Israel is a tiny country in comparison to Australia, so their focus is always on looking to the US, Asia and Europe to expand. From day one they don’t launch locally, they launch internationally,” Eckersley-Maslin says.

“In Australia we sometimes fall victim of having a population that’s just big enough to support local growth, but not international growth. There’s a focus on staying within Australia and that needs to be addressed.”

He adds that the Israeli startups on display also had “more balanced” teams, usually including professors, entrepreneurs and programmers.

“They’ve got a strong focus and respect for STEM subjects, and that produces more graduates that create the IP and a strong entrepreneurial ecosystem that can commercialise this,” Eckersley-Maslin says.

“They tend to be good at the commercialising aspect, and that’s something our universities can work on.”

Seeing ten high profile Israeli startups pitch on the night provided a number of useful insights for Australian startups, Williamson says, including the importance of knowledge and expertise, earlier partnerships with marquee brands and an emphasis on well-known investors.

“Anything we can do to build bridges to Israel in the tech scene is going to be mutually beneficial,” she says.