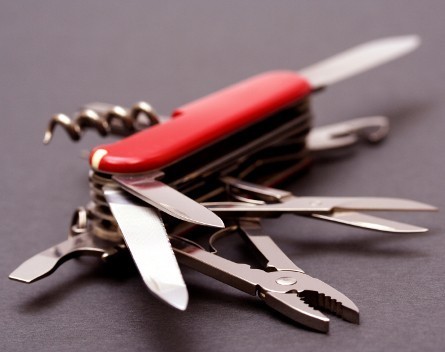 I read a tweet a few weeks back that had my head meeting my desk repeatedly. The advice was, “Don’t build a Swiss army knife, build a scalpel.” I get the sentiment behind the message (i.e. build a focused product), but it’s a message that is easily misinterpreted and misapplied.

It closes avenues of thought and experimentation prematurely, it stops people trying things for fear of looking stupid – oh and it’s complete nonsense.

This is one of a thousand pieces of advice you’ll find on Twitter, Facebook and the blogs of founders and “mentors” around the globe (yes, this one included). These snippets of advice have become the proverbs of the startup world, the sort of things that people regurgitate without really thinking about. This sort of advice isn’t judged on its merits, it’s judged on the number of retweets. Please! Stop and think before applying this advice to your business!

Like anything you read on the internet, most of it is plain bullshit. And the stuff that isn’t bullshit should still come with a lengthy list of disclaimers and more than a little context.

If you’ve studied at school or university, one of the first things you learn about doing research is to always check your sources. Only a fool publishes data from sources that are unverified, and yet in this day of easily digestible and repeatable tidbits, all too often a lot of smart people hit the retweet button without thinking about what it is they’re promoting.

“Fail fast” or just give up quick?

The big problem with any such “startup advice” is that it comes without context. “Fail fast” is a classic case of advice often delivered without context. Do you know who originally said it? Do you understand the full extent of what they were talking about? Does it even apply to a business like yours? Or, are you just hitting retweet because it seems catchy? (BTW, here’s a great article by Mark Suster on failing fast, go read it!) There are many, many problems that cannot and will not be solved quickly but may take months, years or even decades.

If, as a founder, the extent of your ability to focus on a problem is reduced to the commonly accepted definition of “fail fast”, then you may simply end up giving in too soon. In the process you’re probably wasting a lot of people’s time and money by running the race but never finishing. Significant achievements take time, money and effort, and unless you’re working with a deeper understanding of what “fail fast” is really getting at, you could just be using it as an excuse for being lazy. This is just one example of how using these startup proverbs as a mantra can lead you astray.

Why the sausage matters

But the worst way this sort of advice rears its ugly head is when making decisions in a team. There is nothing worse than having an idea or suggesting a course of action and having someone glibly replying something like, “Sell the sizzle, not the sausage.” It is spoken as if it is advice passed down from God himself, and that it is somehow equally infallible. It stunts conversation, and stops people trying out new ideas.

The same can be said for those that lean on such truths as “I read it in a blog post”, “I saw a YouTube video” or “I went and saw a talk on it”. Unless you have some unequivocal proof that sizzle is indeed better to sell than sausage, you’re better off just testing it for yourself. Every business is different, and more importantly, every market is different. Some people buy on emotion, and some people buy off a checklist. The latter is very much about the sausage, not the sizzle.

And this is the real problem — there are few, if any, absolute truths in a startup. The whole point of what we do is to find new ways of solving existing problems. For every person who tells you that success is “all about hustle”, there’ll be another that will tell you it’s “all about execution”. Blindly following either path without consideration for how it applies to your business is plain stupid. Any advice without context is worth as much as the effort it took to cut and paste it.

The enduring popularity of the Swiss army knife

And that brings me back to the legendary Swiss army knife. This is a tool that has been around for well over a hundred years, has become synonymous with adaptability and usefulness, and to this day is still actually standard equipment for military personnel in countries all over the world. Victorinox alone ships 60,000 of them every day, and that obviously doesn’t include the dozens of other brands making their own versions. It’s easy to say “it does 20 things and does none of them well”, but when you consider the value of portability to the intended customer, it’s not hard to see exactly why they’re still so damned popular.

By closing your eyes and accepting “build a scalpel” as the ultimate truth, you’re missing out on some important learning opportunities. There is far more to be gained from understanding why the Swiss army knife is actually a fantastic example of focus, rather than simply dismissing it as something that isn’t.

For startups, the humble army knife has become a symbol of the typical unfocused product, when in fact it’s a shining example of absolute customer focus. The fact that it is so completely useless to me at home when I have a shed full of tools is precisely the reason why it is so useful when I’m hundreds of miles from civilisation. The value of its portability far outweighs the value of its individual functions.

So next time you see someone saying “build a scalpel, not a Swiss army knife”, don’t just hit the “retweet” button. Start a conversation about focus and value, customers and markets. Then ask them if they own a Swiss army knife; with over 23 million being made every year, they probably do.