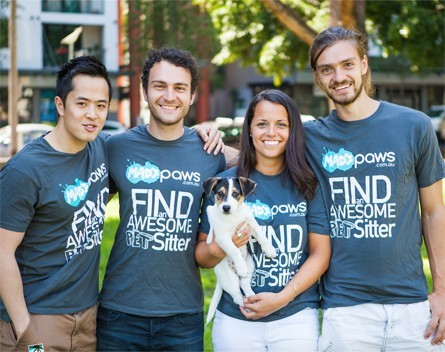 There’s a search on for the next big thing in the sharing economy and investors around the world are backing pet-sitting marketplaces in the hopes of finding it.

Mad Paws has over 3500 verified pet sitters on its platform, and says bookings, of which it takes a 15% cut, are growing at 50% month-on-month. Unlike Pawshake, which has launched in 16 markets in addition to Australia, Mad Paws is focusing exclusively on the Australian market, co-founder Alexis Soulopoulos says.

“It allows us to be super, super close to our users,” Soulopoulos says.

“Our focus is 100% winning in Oz. Having a large number of sitters on the platform is only the beginning. It is very important to connect demand with supply in a smart way.”

Soupoloulos says he’s personally called and spoken to over 1000 pet-sitters and customers himself, as the Mad Paws team has worked to understand their growing base of users. He credits the insights gained from those conversations for Mad Paw’s current growth rate.

“All of those insights are constantly being translated to our website in order to make this a scalable business, and also to our customer-facing processes,” he says.

The startup plans to use the funding to grow its team of full-time staff from four to eight and ramp up its marketing efforts.