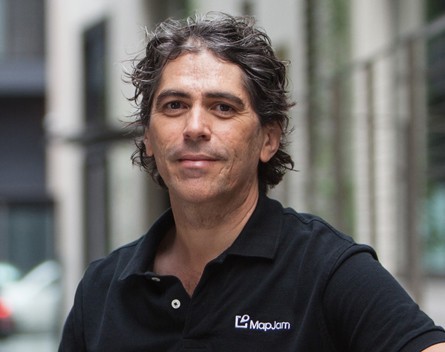 San Francisco serendipity is the biggest advantage of moving to the world’s startup hub, according to MapJam co-founder Jack Gonzalez.

It was a few chance encounters, the type Gonzalez says are far more likely to occur in San Francisco than any other part of the world, which led to Aussie-founded US-based MapJam closing a $950,000 capital round earlier this year, and being accepted into the 500 Startups accelerator program.

“I love Australia and I miss it,” Gonzalez told StartupSmart from 500 Startups office in downtown San Francisco.

“I have some friends in Sydney that will contradict me, but you really have to be here. It really is all about relationships and relationship building. I was going down the elevator yesterday, and I ran into a VC. We had a good half an hour chat in the lobby, she gave me her card and said, ‘hey you’ve just closed a round but reach out to us when you next go fundraising.

“The other day, I was in the elevator with the head of marketing for Airbnb.  That doesn’t happen anywhere else in the world, I’m sorry to say.  Serendipity happens here a lot.”

MapJam’s platform allows users to create custom maps that can be embedded and shared across the web, without needing to know how to code. Its product has been used by the Huffington Post, and the startup is currently in discussions with a large American real estate agency, and a “huge retail brand”.

In the days after appearing on the Huffington Post front page, MapJam received more traffic than it had in the prior three months. Since then traffic has continued to grow 15% week-on-week.

Although the sheer density of startup founders, talented potential employees, and venture capital, makes networking easy in the San Francisco area, Gonzalez says there’s a misconception that fundraising there is a breeze.

“It really takes a minimum of three months, you’ve got to knock on a lot of doors, it’s a full-time job,” he says.

“Again it’s about relationship building. We actually managed to raise 30% of the latest round thanks to an Aussie who gave us a warm intro. He did, we got the meeting, and bang, (the investor) was in.

“We’ve actually met a couple of Aussie VCs who have visited. But there’s a different mentality .

“Here it’s all about getting traction, getting adoption, then working out your revenue. “

Gonzalez wouldn’t go into the details of MapJam’s revenue model, but said when a large retail brand approached the startup earlier this month, the first question the representative asked was “How much?” and “didn’t bat an eyelid” at the response.

“(Co-founder) Scollay Petry and I are really passionate about geography and about mapping, but also about simplifying technology. And if you think about it, when Google Maps first came out, about 10 years ago, it was all about coding, an API, and you needed somebody to stitch it all together.

“There are other websites that have made building a website so simple that you don’t need to write a single line of code. This is what we’ve done with MapJam. It’s all drag and drop, click and point, share and embed.

“We’re really focused on getting our platform embedded everywhere.”