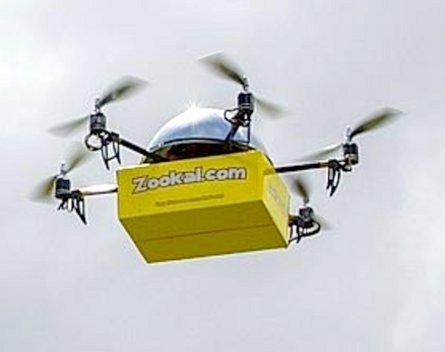 It takes a gusty entrepreneur to start a pitch claiming Amazon’s plans for drone deliveries are vaporware, and then that his tiny team can and is pulling it off.

But that’s exactly how Sydney-based drone startup Flirtey’s Matthew Sweeny kicked off his pitch at one of the Startmate accelerator demo days recently.

He’s one of eight Australian startups hitting the shores of the United States with hundreds of hours of pitch practice behind them, in a bid to woo early stage investors with their bright ideas.

Sweeny told StartupSmart they believe they’re ahead of the curve with the incoming surge of accessibly priced robots.

“Our vision is a future where flying robots are low cost and ubiquitous,” Sweeny says. “I founded Flirtey because I realised there had been no innovation in delivery for a long time and wanted to develop a disruptive technology that would create a new industry.”

The idea for drones emerged for Sweeny while he was studying in China and tinkering with helicopters in his spare time.

Realising the technology was at an inflection point, Sweeny decided he wanted to be part of making drones mainstream.

The Flirtey technology was developed with the assistance of the University of Sydney’s Warren Center for Advanced Engineering.

The drones operate on rechargeable lithium polymer batteries. Sweeny says they can carry parcels of up 2kg for a range of up to 10km. They use GPS to locate customers, and may be tracked via smartphone in real-time.

“The market opportunity is enormous, we’re in discussions with some of the world’s largest online retailers for UAV delivery,” Sweeny says.

As for the regulations around drones: Australia is apparently a good place to start, as it has already legalized commercial UAV flights.

Flirtey previously partnered with a textbook startup Zookal (video below) to demonstrate what the technology could do. The story garnered some international media attention, with some reporters believing the hype was a little premature

Beyond ecommerce deliveries, Sweeney says the drones could also be used to deliver food and even urgent blood and medical supplies.

But it’s not going to be simple. Other than Amazon, Flirtey is just one of 219 drone startups registered on Angel List.