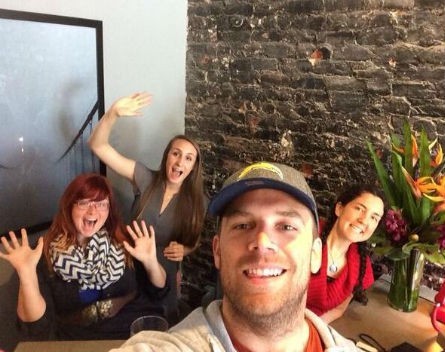 The tyranny of distance isn’t an issue for two Australian men who have built a $300,000 tech startup in just a year.

Gold Coast-based man Dan Norris and San Francisco-based Alex McClafferty launched wpcurve.com, which offers 24/7 support for WordPress websites, believing it was a business that was highly sought after by business owners.

The pair launched the business in seven days with a simple landing page and an email to Dan’s contact list.

Since then, they’ve only spent $180 in advertising the service, instead creating useful content such as blog posts, podcasts and guides for people building an online business. This has helped them grow to 25,000 visits a month in their first year.

The business has grown from $0 to $300,000 in annual revenue in just over a year, with no funding and no seed capital. They’re transparent about revenue figures, posting them here.

“The business has been entirely bootstrapped and built from the ground up. Creating a business that generates real revenue in the first year is the exception rather than the norm in startups, so we’re proud of our achievements,” McClafferty says.

It all started after McClafferty began following Norris’s first startup, Informly, which centralised statistics from a variety of cloud-based services. After 11 months, he says Norris was only generating $476 in monthly revenue.

“This indicated two things to me – the product wasn’t right, but that Dan had grit.”

At the time, McClafferty was consulting as a project manager at Telstra in Sydney, and started reading Informly’s monthly reports. He made contact with Norris, and they began Skyping. He offered to work for Norris for free for three months, with the view of forming a partnership.

“We had a few Skype calls to get to know each other, and Dan was exactly what I expected – intense, focused and had a sense of urgency to get stuff done. We filled out a co-founder interview, and set about working together. After I got a few early runs on the board, like coverage in relevant publications, we realised it was going to be a good fit.”

Despite having never met, building trust was easy, McClafferty says.

“When you read anything that Dan writes, you’ll see that he has no hidden agenda, and what you see is what you get. The fact that I was willing to eschew my six figure consulting career demonstrates my commitment to this idea, so we’ve never had any issues with trust. If there’s any confusion or disagreement, we jump on a call and resolve it face-to-face,” McClafferty says.

The pair uses a few tools to stay in touch. Slack.com allows them to chat with each other and the team. For face-to-face calls, they use Google Hangouts or Skype, with two scheduled meetings a week.

The business has 15 staff, 90% of the development workforce is based in the Philippines, with a developer in Costa Rica and Los Angeles. This allows them to provide very fast turn-around for WordPress problems.

They have implemented a 20 page document as part of the recruitment process, which helped to sift out the most talented WordPress techs, he says.

“Recruitment and retention of excellent staff is something that we’ve had to get really good at, really quickly. We pay our development team above market rates and make sure they have the tools, processes and resources to quickly solve customer problems.

“One of my favourite meetings is my weekly team meeting, where I have a video call with my team of developers and ask for their input into how we can improve our service.”

Their first-ever meeting will be in San Francisco at the end of October.

“Dan’s a big fan of craft beers, so I have a feeling we’ll be touring San Francisco in search of the best beers we can find. After that, we’ll grab some dinner and will have some catching up to do. We’ll also be locking ourselves down in a meeting room at my co-working space to work through some long-term planning and strategy.”