Meet the startup behind The Australian’s 50th birthday celebrations 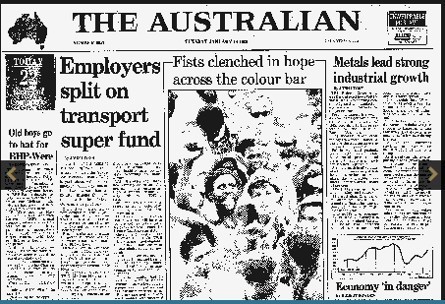 A Sydney-based startup was behind a website that formed part of The Australian’s 50th birthday celebrations.

The Your Storyline site was created by Native Empire, which took a lean startup approach to developing the app for News Corp.

Founder Andrew Tweedie told StartupSmart the business began about three years ago and operates out of tech hub Fishburners in Sydney.

“We’re building social and mobile engagement tools to help companies tell their brand’s stories to people in an engaging way,” he says. “And we’ve been doing this out of Fishburners, a community of startups.”

Tweedie says he came from a digital agency background but then decided to strike out on his own. This gave him the skills to deliver on what was “an interesting challenge”.

“The brief The Australian put to us was pretty broad but it was about the 50th anniversary meaning a lot to the newspaper,” he says. “But they wanted it to mean something to other people as well.”

In the end, Tweedie thought it would be best to give people the opportunity to relive The Australian’s stories over the past 50 years.

“We came up with the personal storyline where people could enter their birthday and match up with the front page from the day they were born.”

The project took off on Twitter, and Tweedie says it is “really cool” to see people engage with the website in the way he hoped they would.

The @australian is 50 – see the front page of the on the day you were born & key moments in your life: http://t.co/S1WiD1G75r #ausstoryline

Tweedie says working in a collaborative space such as Fishburners has been fundamental to Native Empire becoming the business it is today.

“It’s been probably the single greatest factor of our success,” he says. “It’s less about being a co-working space and more about a co-helping space.”

The entrepreneur also has some tips for those considering leaving their day job to create their own startup.

“First thing I would say is definitely do it,” he says. “We have got a great future ahead of us and we’re doing things we really want to do. Second thing I’d say is find other people to help you.”

News Corp is a sponsor of the Fishburners community.