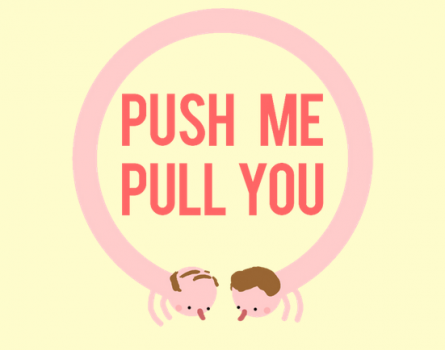 When friends Jake Strasser, Stuart Gillespie-Cook, Michael McMaster and Nico Disseldorp decided to develop a game to kill time over summer, they never thought it would lead them to San Francisco, $25,000 in funding from the Victorian government, and the development of their own games studio.

The four friends have been working on PC game Push Me Pull You, since last December, and are currently in the process of creating their own game studio House House.

Push Me Pull You is a cooperative physics-based sumo-soccer game where teams of two compete against each other, controlling the two heads of a single elongated body, and proceed to wrestle the other “sports-monster” for control of the ball.

This week the Victorian government Minister for Innovation Louise Asher announced the team was one of three game development companies awarded a total of $75,000 in funding through Film Victoria’s Screen Marketing – Game’s Release program.

Joining the Push Me Pull You team in receiving funding were Baffles the Fox and CrackerJack Games.

Since development on Push Me Pull You started, it’s quickly morphed into something more.

“It was just so we could hang out and do something creative, and feel like we’re doing something worthwhile while we were hanging out all the time,” Strasser says.

“We started in early December and worked on it for the month, and on New Year’s Eve our friends put on a little festival and we had a tournament there for a room full of people, it was encouraging to see everyone play it and enjoy it.

“That could have been the end point, but we kept going with it.”

So that’s what they did, and eventually thanks to their website, they were invited to the That Venus Patrol and Wild Rumpus Party at the Game Developers Conference in San Francisco in March alongside the likes of the critically acclaimed Nidhogg.

“It’s gone slow enough that we’ve never been surprised when something incredible has happened,” Strasser says with a laugh.

“But when I look back over the eight months, it’s been crazy.”

He says the $25,000 grant will help the team go through the first stages of beginning a games studio, speaking to lawyers and accountants, and says the assistance provided by Film Victoria throughout the process has been invaluable.

“It’s such a daunting thing to start,” Strasser says.

“But we just want to keep making games.

“[Business] is still like this complete alien world, with its own set of rules that seem quite arbitrary when you first get in there. We’re constantly learning as we go.

“But when the next big question comes up, we find a way to answer it. I spoke to another game studio, the director of Big Ant yesterday, we’re getting better at reaching out and asking our elders and people with the wisdom for advice, which we wouldn’t have ever done a little while ago.”

The team hopes to release Push Me Pull You on PC by the end of 2014, although there is the possibility of a console release too, which would push that date back further.