“No one can shut it down”: Kim Dotcom outlines plans for “people’s” alternative internet 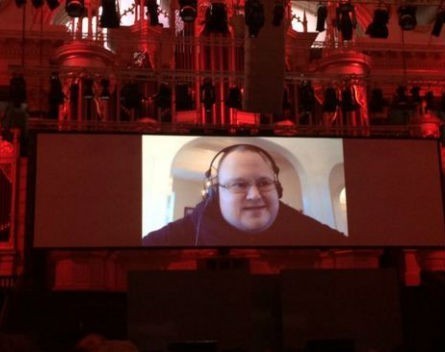 The “world’s most controversial internet entrepreneur” Kim Dotcom has further outlined plans for an “alternative internet” that he says would guarantee users complete privacy.

Speaking at the SydStart conference on Thursday night fresh from losing an appeal to stop an extradition hearing, Dotcom pitched the new internet and outlined plans for a crowdfunding campaign next year.

He plans to close a seed round for MegaUpload of “not more than $5 million” in January to develop a prototype before opening a “massive” equity crowdfunding campaign.

“The more people that install the app onto their devices, the more powerful the network will become.

Dotcom says his desire to create an alternative internet focusing on privacy emerged from the Edward Snowden NSA revelations of 2013.

“I think that opened the eyes of the world to what is going on with our privacy and the intrusions that are taking place,” he said.

“With all these revelations one would have thought that the government would stop this and listen to us, but they haven’t.

“Our internet has become a gathering ground for surveillance agencies. They’re taking all of our data and all of our communications.”

“The internet as we know it today is basically a giant public forum for governments to know everything that we’re doing.”

That’s where Dotcom’s MegaNet comes in. Using the same technology as BitCoin, the blockchain, it won’t include an IP addresses and will encrypt all data.

“The only way to fix this is with technology and with creating solutions that make it impossible for governments to breach our privacy,” Dotcom said.

He says he hopes the new platform will launch in beta in a year’s time, and has lofty ambitions for it to grow to be used by 100 million people within another year.

“It will take time,” Dotcom said.

“It might even take decades before we have the mass connectivity I think it will have. But when we achieve it we will truly have internet for the people. Nobody will be able to shut us down or surveil us and invade our privacy.”

Dotcom’s speech at implored the entrepreneurs in the audience to take notice of his new project.

“When the time comes I would like all of you to pay attention to MegaNet and have a look at it,” he says.

“I want to create something that the world will use for a very long time and will keep our privacy safe.