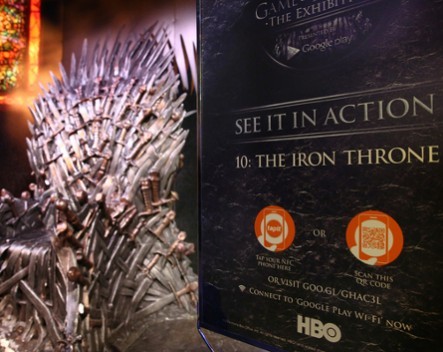 An Australian startup leading the way in contactless communications has big plans for the future, including a rapid overseas expansion and further collaborations with some of the world’s biggest companies.

Tapit, a startup developed and launched in New South Wales, worked with HBO to allow people to use their mobile devices as scanners to access exclusive content at the recent Game of Thrones exhibition in Sydney.

Co-founder Andrew Davis told StartupSmart the business is seeing revenue grow by more than 30% each year.

The startup was founded in 2011, and has since been pioneering contactless communications and new ways for people to access information on their phones. The business got a leg-up from a NSW government grant that same year, which allowed Davis and the other founders to leave their day jobs and focus their attention on Tapit full-time.

Davis says the idea for the startup came after the co-founders were talking about how people had to download apps or type long URLs in order to access content on their mobiles.

“We thought there must be an easier way for people to do that,” he says. “One of the co-founders made a demo of the experience and we thought, this is it. If it’s that simple for people there has to be value in it.”

With just six employees in Australia – four full-time and two part-time – Tapit is making waves with an annual revenue of almost $1 million. Davis says the vision for the startup from day one has been to spread the concept beyond Australia because the problem the co-founders originally set out to tackle isn’t limited to Australia.

“At the moment we’re trying to raise another round of capital and that’s to really aggressively expand the business in Australia and more importantly overseas,” he says.

Part of Tapit’s strategy has been to work with large companies locally and then use that as a starting point to launch larger projects overseas. This is because while there are around 5 million phones in Australia with Near Field Communications (NFC) technology, there is an estimated quarter billion worldwide. As part of this focus, Tapit recently worked with Google in the US to allow people to access movie-related content on their phone by scanning event posters.

“It was a great example of the technology being used in a compelling way,” he says. “It’s not every day that an Australian startup gets to work with Google HQ.”

When asked what his advice to Australian entrepreneurs wanting to make their idea big in Australia and abroad, Davis said it’s all about believing in your vision.

“You can’t wait for stuff to fall in your lap,” he says. “You got to go out and do it yourself and convince others.”